Baek, who appears on such shows as “House Cook Master Baek” and “My Little Television,” is neither a highly trained chef nor a commanding kitchen presence. While most TV chefs dazzle viewers with luxurious Western recipes and impeccable plating, Baek has been preaching the charms of Korean home staples like doenjang (fermented soy bean paste) and kimchi jjigae stews, converting the public to easy home cooking over fancy restaurant-hopping. With his good-natured grin, rolling Chungcheong Province dialect and astonishingly simple yet tasty recipes, Baek has emerged as the anti-celebrity chef.

“My recipes are best for people who live alone or who have never been interested in cooking before,” said Baek at a press interview on July 8 at the studio of the show “House Cook Master Baek” in Paju.

Baek incorporates only the most common of ingredients into his cooking, including onions, eggs, canned tuna and white radish -- a refreshing change of pace from other made-for-TV dishes which require ingredients difficult to procure in Korean markets, like chives, shallots and avocados. Some of Baek’s recipes that have gone viral include pan-fried potatoes, all-purpose soy sauce, spicy braised mackerel and stir-fried rice -- all typical Korean dishes that take less than thirty minutes to make. 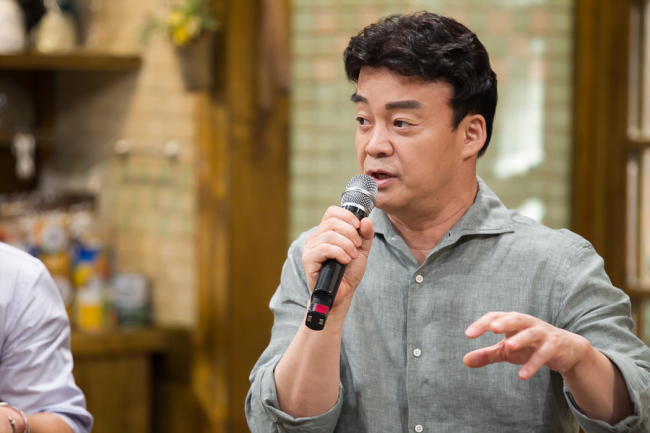 Businessman, cook and TV personality Baek Jong-won speaks at a group interview on Wednesday at the studio of "House Cook Master Baek" in Paju, Gyeonggi Province (CJ E&M)
Another reason behind Baek’s widespread appeal lies in the businessman-cook’s humility.

Though his neighborly demeanor might not betray it, Baek is a savvy entrepreneur and restaurant tycoon who owns over 26 franchises and 169 branches across the country, with stores now expanding to the U.S., Japan, China and Southeast Asia.

But Baek confessed that when he first started out, he was not always the down-to-earth person he has now become.

“When I was younger, I liked being called ‘CEO’ or ‘president,’” said Baek at a press interview Wednesday. “I liked being looked up to back then, that feeling of being better than others. I was always polite to customers, but it was just an act.”

When the Asian financial crisis struck in 1997, however, Baek’s businesses collapsed, dealing a shocking blow to the restaurant entrepreneur, who had until then enjoyed a relatively cushy life.

“I had not really experienced failure before that. I was fortunate enough to be born into an affluent family and educated at good schools,” said Baek, a graduate of Yonsei University and whose family owns the Yesan and Yehwa school foundations.

In the course of getting back up, Baek decided to shed any sense of pretentiousness he may have had.

“I learned that sincerity is easier and more effective in the long run than being overly charming or polite. People trust you when you are just being yourself.”

The ability to be comfortable in his own skin and show his true colors on air stems from a deep sense of self confidence, Baek said.

“I am able to be myself and not worry, because I’m not hiding anything,” he said. “I hope that my thoughts, words and actions can all be in line with each other. I figured out that if I want to seem humble, I should actually think humbly, rather than pretend to act humbly.”

This philosophy translates in Baek’s cooking and home life as well. Baek is happily married to actress So Yoo-jin, and the two are famous in the Korean celebrity network for their displays of affection and devotion to each other.

“What drew me to (So) was how she was happy to go grab a bowl of noodles on dates, nothing fancy.” said Baek. This is the kind of food that he aims to make -- food that is comforting and accessible to everyone.

“I want to liken my food to a bicycle with training wheels. Anyone can ride it, easily, with no intimidation, from older people to people who have never ridden a bike before in their lives,” Baek explained. “If highly trained top chefs are cyclists, then I’m just the owner of a neighborhood bike shop.”

Ko Min-goo, producer of “House Cook Master Baek,” describes Baek as someone who is eager to share his knowledge, and points to the cook’s sincerity as the secret behind his popularity.

Baek is the best example of the latter, Ko said. “Every time one of his students (on the show) learns something new, (Baek) gets very enthusiastic and says, ‘That’s right! That’s right!’ My only job is to make sure that sincerity shines through.”