South Korea achieved fast economic growth from the rubble of the Korean War in just around half a century to become one of the world’s economic and IT powerhouses.

Behind such achievement were government-led projects and support measures for science and technology.

The nation that has made such economic advancement through science and technology will be able to play a key role in promoting sustainable economic growth among developing and developed nations during the upcoming OECD Ministerial Meeting Daejeon 2015 and the World Science and Technology Forum, according to Lee Jae-hong, secretary general of the preparatory secretariat for the events under the Ministry of Science, ICT and Future Planning.

“One of the main issues to be discussed during the science and technology event will be inclusive growth, an initiative upheld by the OECD to make lives of people in all nations better through science and technology and to promote cooperation between developing and developed nations for the cause,” Lee told The Korea Herald in a recent interview.

“Since Korea is an exemplary nation that has gone through various stages of economic growth, hosting such an event will be a great chance for the nation to make contributions to realizing inclusive growth,” he added. 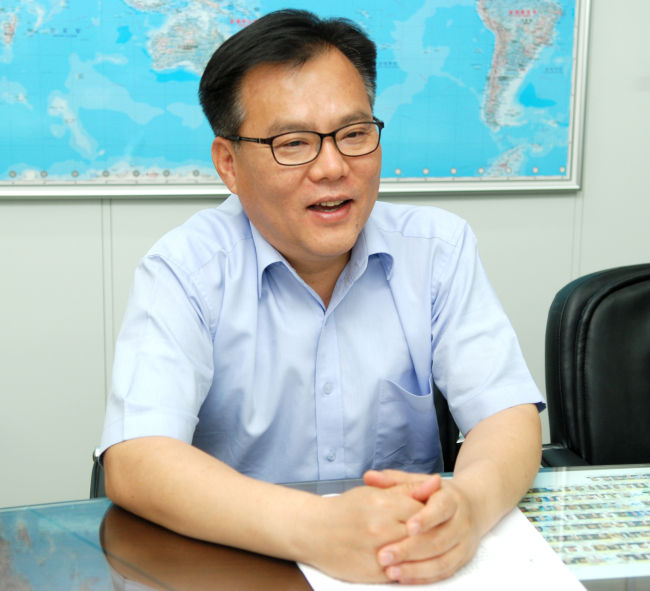 Lee Jae-hong, secretary general of the preparatory secretariat for the OECD Ministerial Meeting Daejeon 2015 and the World Science and Technology Forum. Science Ministry
Saturday will mark 100 days to go for the start of the OECD event, which will be held from Oct. 19-23 in Daejeon.

The science and technology forum will kick off on the first day of the event, followed by a two-day ministerial-level meeting, forums and a trade fair.

This year’s ministerial meeting will be held outside Paris, in which the OECD headquarters is located, for the first time in the organization’s history, and non-OECD member nations, including the Philippines, Thailand and Vietnam, will also take part in some programs.

As shown in the main theme of this year’s meeting -- “create our common future through science technology and innovation” -- participants will mainly talk about the roles of science and technology in revitalizing economies, spurring the growth of businesses and creating jobs.

Lee said the Korean government’s flagship creative policy will also be shared among the global government officials working for the world’s science and information technology sectors through the so-called Daejeon Declaration, a joint statement to be issued during the meeting.

He also added creative economy is a mainstream trend in the world’s economic field that places focus on making innovation through convergence of technologies and supporting entrepreneurship.

“Creative economy has been existing for many years in different forms and names in other nations, such as I-Corps in the U.S., Tech City UK in the U.K., Industrie 4.0 in Germany and Zhongguancun in China,” he said.

The OECD Ministerial Meeting Daejeon 2015 and the World Science and Technology Forum will be attended by around 3,000 participants from 50 countries, including science and technology ministers, Nobel Prize laureates, scholars and CEOs of global firms.

Some of the participants who will deliver speeches during the forums include Jeremy Rifkin, an economist and author of “Entropy” and “The Zero Marginal Cost Society”; Aaron Ciechanover, 2004 Nobel Prize winner in chemistry; and Jim Newton, chief executive of TechShop, a membership-based workshop that provides members tools and equipment.