[ The Korea Herald – Send E-mail ]
[Herald Interview] Korea urged to set ambitious climate target
By 서지연
Published : Jun 24, 2015 - 18:41
Updated : Jun 24, 2015 - 20:28
The international community is concerned about Korea’s possible retreat from its emissions reduction drive based on the four options proposed by the government for the post-2020 target.

The government announced four options on June 10 to finalize Korea’s emission target by the end of this month. It plans to submit one target -- after a public consultation process -- to the U.N. before the Paris Climate Change Conference from Nov. 30-Dec. 11.

“(Regarding the expectation for Korea’s post-2020 emission target), first of all, I expect to see more ambitious commitment, not less ambitious than the 2020 commitment,” David King, special representative for climate change at the U.K. Foreign Secretary Office, said in an interview with The Korea Herald this week. 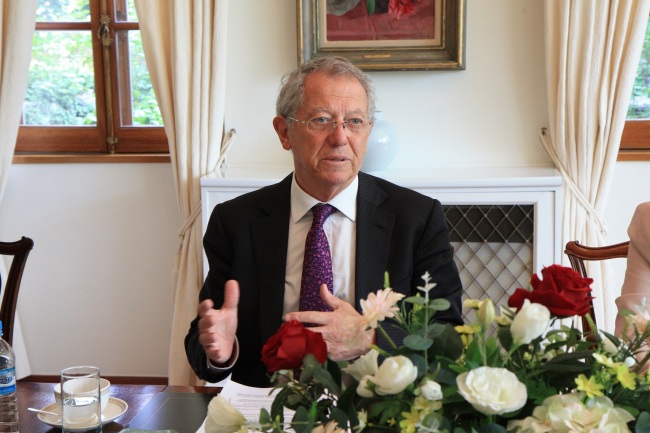 Sir David King, special representative for climate change, U.K. Foreign Secretary Office, at the British Embassy in Seoul.
His comments hinted that the four options announced by Korea may fail to meet or beat the expectations of the international community.

The four options for the country’s second-round emissions cut target range from 14.7 percent to 31.3 percent below business-as-usual, or BAU, levels by 2030, depending on the way power is supplied.

Many Korean energy experts and civic groups also agree that most of the options are less progressive than the 2020 climate target set by the previous government.

In 2009, the Lee Myung-bak administration pledged to keep 2020 emissions at 30 percent below BAU levels.

“My second point is that we need to be talking about the ‘absolute emissions,’ not compared with BAU characterization (to set an emissions target). The whole world needs to talk about the peak emission before 2025, if we have to stay below 2 degrees Celsius limit,’’ he said.

When Korea adopts an absolute emissions-based formula, however, it has to further raise its emission target.

Behind Korea’s shift to the passive attitude toward the climate target are rising concerns over its negative impact on economic growth.

He, however, stressed the need to see both sides of the climate change issue.

“The challenge (from climate change) is an enormous opportunity for innovation and wealth creation because we are switching our energy enterprises from fossil fuel base to zero-fossil fuel. That can be only an opportunity for technology and for entrepreneurs,” he said.

As an international figure who has dedicated his life to building a global framework for green gas reduction for more than a decade, he reminded Korea of global transition to low-carbon economy.

“The transition to a low-carbon economy is gaining momentum around the world,” he said.

The U.K. envoy also highlighted the announcement in the G7 meeting in early June. Ahead of the Paris negotiations, leaders from the world’s seven most industrialized economies agreed that this is the last century of the fossil fuel age.

As part of efforts to launch an international binding deal for greenhouse gas reduction, the envoy has been traveling across the world to discuss the importance and urgency of action to tackle climate change with government officials and business leaders since his appointment for the current position in 2013.