Over the next several decades, using foreign aid, Korea elevated its economy to the world’s 14th largest, pushing the frontiers of market and technology.

The miraculous transformation of a once-ravaged country was aided in large part by the World Bank, which provided over $15 billion in development assistance to build Korea’s railways, rural towns and schools.

The World Bank Group Korea Office and Korea’s Ministry of Strategy and Finance organized the conference, “Korea Week 2015 ― Retrospect and Prospect,” at the Sheraton Incheon Hotel in Songdo from Monday to Tuesday, celebrating the last 60 years of productive partnership. 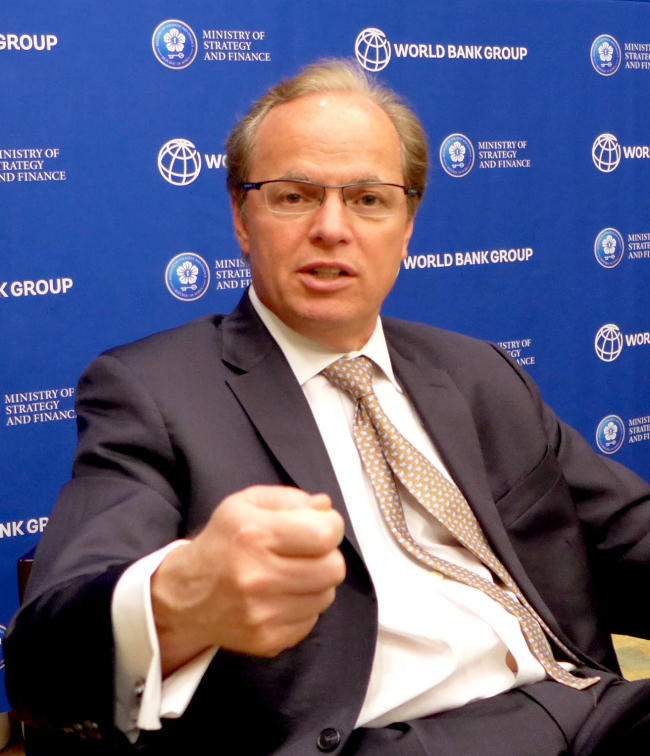 “In Korean culture, 60 years represents a life cycle and Koreans say that life truly starts at 60. I hope this year will mark the beginning of our new lifelong partnership,” Axel van Trotsenburg, the WBG vice president of East Asia and the Pacific, told The Korea Herald on Monday.

“Although the form of our relationship has evolved over the years, its depth and importance remain the same. Our solidarity strengthens our institutions and motivates other countries that are still struggling.”

In an effort to deepen engagement with Korea, the World Bank opened a Korea Office in Songdo, Incheon in December 2013.

Korea became the first country to become a donor after having been a recipient by joining the OECD’s Development Assistance Committee in 2010. Since then, it has more than doubled its ODA contributions to $1.85 billion last year, offering replenishments to countries in Africa and South and Southeast Asia.

In the early days, the World Bank provided financial support, policy advice and technical assistance to Korea. Between 1962 and 2001, Korea received over $15 billion for 133 projects in rural development, transport, education and environment.

The World Bank provided $65 million to build roads and housing in Gwangju in 1980, which contributed to Korea’s balanced development. It provided $100 million for vocational training of workers between 1980 and 1986.

Nowadays, some 50 Korean institutions and companies are providing technical assistance to developing countries in the areas of finance, information communications technology, electronic learning and urban and sustainable development.

The key to a successful partnership, according to Trotsenburg, is long-term engagement capable of meeting the evolving challenges of the globe.

“Korea beat the perception of a poor country by lifting its meager income at the end of the war to a $25,000 mark,” Trotsenburg said. “This has been nothing short of impressive. We can help lift people out of poverty globally as Korea has done itself.”

The factors that have led to Korea’s economic rise are the sound regulatory framework and macroeconomic policies, an export-oriented strategy, high savings and investment, development of human capital, risk-taking and entrepreneurship, Trotsenburg pointed out.

The land reforms in the 1950s and 1960s distributed income equitably across cities and the countryside. A series of seven five-year development plans from 1961 have harnessed competitive industries, enabling a progression from light to heavy and high-tech industries.

“The combination of strategic policies and hard work allowed Korea to overcome its challenges,” he argued, adding that Korean people have managed to preserve their culture and identity against a tide of modernization.

Trotsenburg said that the World Bank supported multilateralism essential for the international financial architecture. “We need to have the best possible cooperation and coordination, because taxpayers’ money is involved and people want results,” he stressed.

In the spirit of multilateralism, he said the World Bank welcomed the ascendency of the Asian Infrastructure Investment Bank, which Korea announced in March its intention to join, as it will allow both institutions to collectively reduce infrastructure deficits in Asia, he highlighted.

“The World Bank shares information on best practice, operation and governance with the AIIB, as it has done with other multilateral institutions in the past.”

The global infrastructure deficit currently exceeds $1 trillion, of which $800 billion is in Asia. The World Bank provides $10 billion a year of infrastructure financing to Asian countries.

Korea’s future challenges lie in managing its natural resources and greenhouse gas emissions and making a transition to a green economy, Trotsenburg underscored. The aging population and volatile global economy can be other retarding factors on growth.

The good news for Korea, according to the vice president, is that it belongs to the world’s most economically dynamic region of East Asia, which creates more than half of global growth.

“Korea has been exemplary in conquering overseas markets with its export-oriented strategy and continuous innovation,” he said. “Continuing the path of success will open new blue oceans for Korea.”