[ The Korea Herald – Send E-mail ]
[Herald Interview] ‘High payoffs both driving factor, risk in education’
World Bank adviser voices concern over possible side effects of Korea’s education fervor
By Yoon Min-sik
Published : Jun 1, 2015 - 20:01
Updated : Jun 1, 2015 - 20:01
“No pain, no gain” has long been the mindset of students walking down the grueling path of college and university admission in South Korea.

With one’s education status still accounting for much of one’s her career success, students and parents alike often have taken for granted sacrificing their personal hobby and leisure time for hopes of a better future. But a question has been growing in recent years as to whether students are asked to give up too much.

“People understand the route to success is education. That leads students and families to work very hard,” said Halsey Rogers, lead economist with the education team in the Human Development Network at the World Bank. “Question is, at what cost? Is it worth the cost?” 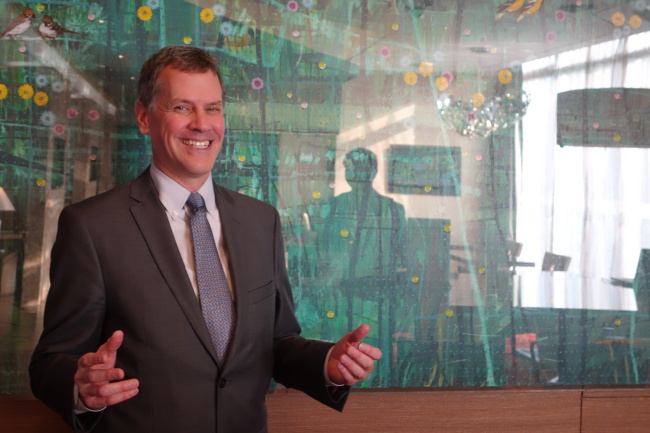 Halsey Rogers (The Korea Herald)
Rogers, who has published policy advice on various areas such as on improving the quality of service delivery in education, said Koreans’ high devotion to education has always been of great interest to him since his year-long stay in the country in 1986. He pointed out that it was one of the driving factors of the country’s success in education, along with the high status of teachers and relatively equal distribution of public educational resources.

But the 50-year-old economist also pointed out that the country’s high dependence on private education is a source of concern.

“There have been talks that it might contribute to inequality (in education opportunities) ... If the university admission process depends heavily on getting private education, then obviously there will be inequality between wealthier and poorer families.”

According to Statistics Korea, about 68.6 percent of students in the country partake in some form of private education, paying an average of 242,000 won a month. The disparity in private education spending between wealthier regions in Seoul and relatively poor rural regions was about 179,000 won.

Rogers suggested that the government should step in to limit tutoring and provide free study materials to reduce that gap. At the same time, the authorities should realize that the reason families are paying so much is because of the payoffs, which can extend beyond college.

“Employers care much about which universities (potential employees) went to. So students have a very strong incentive to work hard,” he said. Such hard work has yielded results, but Rogers pointed out that it came at a hefty price.

“PISA (Program for International Student Assessment) results show Korean students are the least happy in the world. Some (of) the stress has even carried over (to) Korean-American families as well,” he said.

Rogers stressed that learning should be enjoyable, with a more holistic approach, and that students should not be penalized for doing other activities like sports. He pointed out that extracurricular activities can help students in approaching academics as well.

“It is important to develop these social and emotional skills (that) are going to help them in life, not just the cognitive skills,” he said.

In that sense, he said Korea’s “free semester” policy sounds very promising. The policy, which will be implemented in all middle schools starting 2016, allows first-year students to experience various vocational training opportunities instead of taking exams for the first year.

To ensure that this works, however, several changes need to be put in place.

“To accompany the free semester, I think you need continuous reforms from the university side,” he said. Unless the university admission process changes to place less emphasis on just academic accomplishments and more on holistic education, the policy may just end up driving up the private education spending.

“If the school does (a) little less for students preparing for university exams, parents just may invest more in private educations,” he said.

Nonetheless, investment in education is essential. According to Rogers, the World Bank is the largest funder of education in the world and is set to increase its funding even more. The group recently announced that it will double results-based financing for education to $5 billion over the next five years.

“Why education? Because we understand how crucial education is to long-term development,” he said. “It is crucial in two ways: First in the level of an individual, education is the best way to leave poverty. And second as a country, it is a very powerful driver of growth.”

This is why there cannot be such a thing as “too much education,” he explained.

“It would be great to take this drive and figure out how to keep improving, how to make the education experience more creative, enjoyable, more driven by students’ own desires and not just the drive to get into the right company,” he said.

“It’s the question of how do you channel the education fever in as constructive a way as possible, in a way that is less costly to children, the youth and their family.”