[ The Korea Herald – Send E-mail ]
[Weekender] The ‘Samsung Man’
From can-do spirit to innovation, employee standards continue to evolve
By Korea Herald
Published : Mar 6, 2015 - 20:13
Updated : Mar 13, 2015 - 20:40
One out of 100 salaried workers in Korea works at Samsung Group ― the nation’s largest conglomerate with 30 affiliates. There are around 490,000 Samsung employees, with half of them working outside Korea.

Most Koreans have respect for big family-run businesses that have contributed to laying the foundation for today’s economic prosperity over the past decades. Working at Samsung, among others, has long been considered a social status symbol.

The so-called “Samsung Man” refers to the most talented elite people here. They are also the highest-paid employees who enjoy the best welfare benefits. 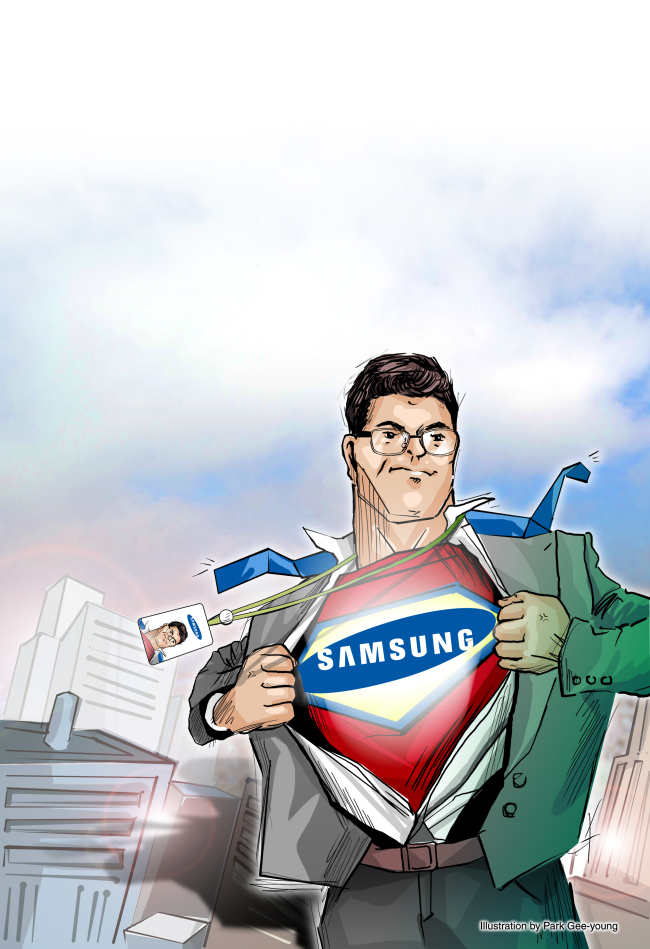 Now the cachet may be weakening as more job options are available. But still almost 200,000 people apply every year for the Samsung Aptitude Test, the group’s unique entrance exam.

The word Samsung Man also represents the can-do spirit of older generations who used to prioritize work over their personal life and never hesitate to sacrifice whenever the company requires.

Under the charismatic leadership of chairman Lee Kun-hee, the loyalty and integrity of employees has shaped not just Samsung’s own corporate culture but also the overall image for Korean workers.

But now at a time when his son Lee Jay-yong, vice chairman of Samsung Electronics, is taking charge, a generational transition is also underway among employees.

A work-life balance is crucial for younger generations. They work as a team if necessary but also want their individual achievements to be fully evaluated. When these needs are not met properly, they are willing to give up the coveted job.

Reflecting the changing atmosphere, Samsung hires more workers than other conglomerates while losing them at a faster pace.

The turnover rate at Samsung Electronics stands at about 10 percent, which compares to some 2 percent at other big companies like LG Electronics and POSCO.

“I still think Samsung is the best workplace in Korea, but the demanding job didn’t work for me,” said a 35-year-old former Samsung Electronics worker who relocated to a state-run corporation two years ago.

Another 30-something copywriter working at Cheil Worldwide, a Samsung-affiliated advertising firm, said he was considering moving to a foreign company. “I feel limitations to shine as an individual here,” he said.

At a time when Samsung is desperately seeking new growth engines amid the rapid saturation of its core businesses, it is facing a tricky situation coping with the generational transition among employees while continuing its growth momentum at the same time.

As part of its efforts, the group has recently decided to overhaul its decades-old hiring system.

It plans to focus more on applicants’ personality and on-site experiences rather than their schools and English fluency. And the new push is expected to affect the hiring process of other conglomerates, too.

This week’s Weekender explores the meaning of being a Samsung Man in Korea and the business empire’s ever-evolving corporate culture.