“We are seeing the end of 100 percent face-to-face teaching,” Blackman told The Korea Herald in an interview last Friday. “In 10 years’ time, it won’t exist. All courses, to a greater or lesser extent, will be blended (of online and offline courses).”

“Crazy” was the word the British educator used to describe the traditional lecturing model, saying it has profound limits in aiding students’ development. “(The model is a) bad pedagogy. I don’t understand why universities are still building lecture halls.” 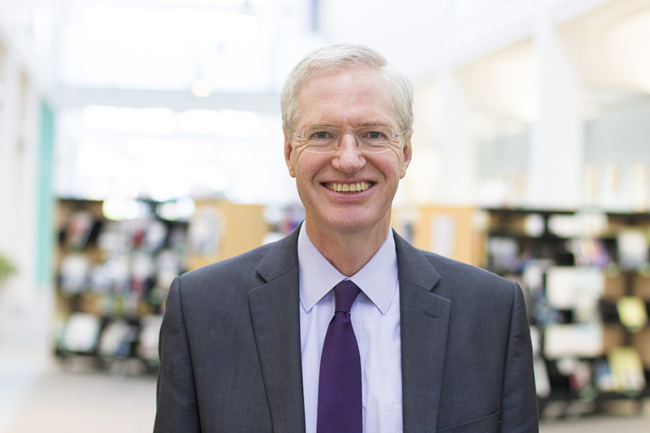 Experts across the world agree that online learning is heralding a wave of change in education.

Last month, the Korean government announced it will launch its first platform for massive open online courses, or MOOC, within this year, jumping on the global bandwagon of providing higher education courses online.

It is crucial for the present education system to get off the traditional path because different skill sets are required for the 21st century, said Blackman, who is visiting Seoul for a conference. He pointed out that the so-called “21st century skills” include digital literacy ― knowledge, skills and behaviors used in a broad range of digital devices.

“Digital literacy is essential because the Internet is everywhere. … Students are required to use skills in digital media, and these competences are transferrable to a whole range of different occupations,” he said. “Every graduate will become a digital worker and a high proportion of them will be digital creators, such as writing software.”

Another skill required in the new era is collaboration, he said.

“Employers want people who can collaborate. That’s where a lot of our research and development is focused; developing collaborative competence among students,” Blackman said.

The technological advance is prompting most colleges and universities to adopt changes, according to observers.

Flipped-learning ― a blended learning method of students watching video lectures at home and then partaking in discussions in classrooms ― is one example of how education institutes are embracing technological advances. Local universities like Seoul National University began implementing the method in 2014.

But Blackman pointed out that the focus should be on catering to students’ needs, rather than on the new technology itself.

“We have to keep up with the students. We went mobile, because our students went mobile. The universities are changing all the time because how students learn is changing. We’re keeping up with that,” he said.

Blackman explained that the majority of the OU’s courses reflect the characteristics of modern day students. For example, most students have an attention span of 15-20 minutes, which is why most of OU’s course periods last that long.

Online-based education also enables more personalized learning compared to traditional methods, he explained, which allows students to learn at their own pace.

“Students will take different lengths of time to master their subject and will need different levels of support. But with the right support and right time, higher education can be mass education.”

Blackman said this has been the commitment of the OU since its founding in 1969. “We’ve been ‘open’ since 1969, and the MOOC is a recent version, but part of the same paradigm,” he said.

Online learning has some distinct advantages over conventional learning, Blackman explained. One of them being the use of learning analytics ― an analysis of student-related data.

“Increasingly we’re using learning analytics, so we can understand student behavior by looking at data from a virtual learning environment. We’re beginning to use that data to identify students who are likely to have problems, and we will target interventions to support them.”

Learning analytics also allows for live feedback that affects the learning designs of courses, he said.

“What we’re doing now is documenting designs of our models and our qualifications. Then we can compare those learning designs to student achievements, and understand which designs work best for students or work best for particular types of students,” he said. They then apply the findings to the course designs, he said.

But experts point out that there are obstacles for online learning, such as a lack of face-to-face interaction among students or with lecturers. They point out that this is apparent particularly among courses that mostly provide online lectures, requiring students to sit in front of a computer screen and take notes.

Blackman acknowledged that the lack of real-life interaction is a legitimate challenge for online courses, but said course providers like the OU can use digital tools to encourage online collaboration among students. He said by using social media and online tutorials, they can help develop collaborative competence in their students.

Blackman said there are ongoing debates at the OU about how to design courses that help develop teamwork.

Despite the shortcomings of online education, he predicted that it would play a bigger role in the 21st century.

“I think blended learning is the future … and flipped classroom is the future. The academic faculty are going to be consultants to students, (it will not be) a one-way communication,” he said.