In a news conference in Seoul on Wednesday, the film’s producer Roy Conli said that Korea was the most “exciting market in the world right now.”

“The 3-D and 4-D technology in (Korean) theaters is amazing. I think the theme of the film ― kids who use science to tackle problems ― will really appeal to the Korean audience.”

Also present at the conference were Kim Sang-jin, the character design supervisor for the film, and Daniel Henney, a Korean-American actor who performed the voice-over for one of the main characters.

Kim, the first Korean to become the top animator at Walt Disney Studios, revealed that the lead characters, although they were later given Japanese names, were originally envisioned as Koreans.

“Early designs were drafted by Kim Shiyoon, a fellow Korean animator, who originally created the characters as Korean. Of course, there are no mentions of specific nationalities in the film, but that was what we, the artists, imagined,” Kim said. 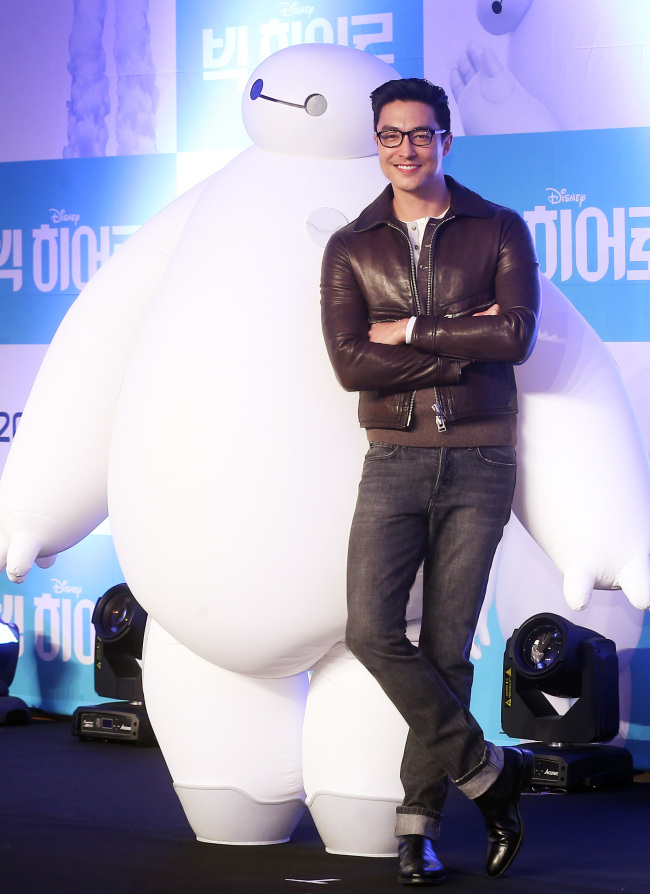 Since its Tokyo premiere in October 2014 and subsequent November release in the U.S., the movie has been met with both critical and commercial success. It has reaped over $409 million in worldwide revenues, surpassing Christopher Nolan’s space epic “Interstellar” in the U.S. box office. The film has received nominations for the Golden Globe for Best Animated Feature Film and the BAFTA Award for Best Animated Film, among others.

Henney, who lent his voice to Tadashi, is another figure who ties the film to the Korean audiences.

He rose to fame in Korea in 2005 with such TV series as “Hello Franceska” and “My Lovely Samsoon,” before he made his Hollywood debut in “X-Men Origins: Wolverine” (2009).

His last appearance on local screens was in “The Spy: Undercover Operation” (2013) alongside acclaimed Korean actor Sol Kyung-gu.

“It was incredibly difficult for me,” said Henney, who in the past year has focused mainly on his roles in U.S. TV series “NCIS: Los Angeles” and “Revolution.”

“I met the producers, talked about what they wanted, and tried to reach that goal,” he said.

Hall, however, said that he knew Henney was the right choice from the beginning.

“Daniel brought so much warmth, generosity of spirit and humor to the role,” he said. “He blew me away with the first line. He came in, read, and I knew. He was our guy.”

“Big Hero 6” is the first-ever collaboration between Disney and Marvel.

“This movie has all the heart and fun you would expect from a Disney film, plus all the action that you would see in Marvel comics,” Hall said. “To mash up my two loves has been a dream come true. It was exciting to jack up the action, but never at the expense of emotion.”

The film will open in local theaters on Jan. 21.