[ The Korea Herald – Send E-mail ]
[Herald Interview] Dressing up a tradition in new clothes
Artistic director Kim Sung-nyo talks about her endeavor to give ‘changgeuk’ a newer look
By Korea Herald
Published : Nov 23, 2014 - 20:56
Updated : Nov 23, 2014 - 20:56
When Kim Sung-nyo began her three-year term as artistic director of the state-run National Changgeuk Company of Korea in March 2012, she had two things in mind.

First was to lure younger and livelier audiences to changgeuk, Korean traditional opera based on pansori, a type of folk narrative. The second was to introduce diverse new forms and styles in changgeuk shows in an effort to transform it from an overlooked genre to the heart of the performing arts scene in Korea.

“I was shocked when reporters told me that they write about changgeuk, but they rarely watch the whole show,” Kim told The Korea Herald during an interview last week at the National Theater of Korea, where the company’s main office is located. “So my goal was to make shows that people are excited to come and see.”

The result was an unexpected feat.

“My dream was to give new clothes to changgeuk,” said Kim, who was a performer with the troupe from 1978 to 1980. “I could not let changgeuk become an antique on display,” said the director. “I simply wanted to add life and fun to our beautiful tradition.” 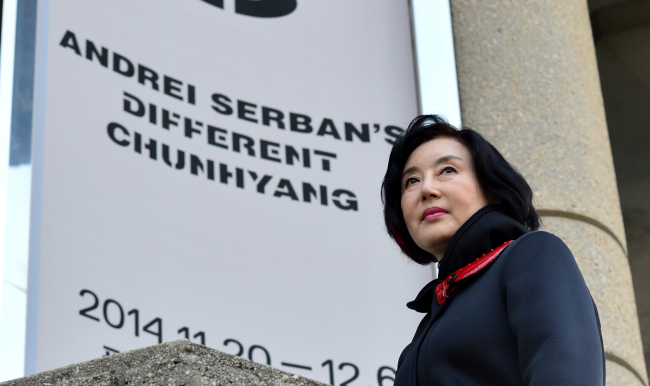 Kim Sung-nyo, artistic director of the National Changgeuk Company, poses before an interview with The Korea Herald last week at the National Theater of Korea in Jangchung-dong, central Seoul. (Yoon Byung-chan/The Korea Herald)
New storylines were added, experimental stages were designed and unconventional directors were found to helm the projects, all in an effort to introduce a new paradigm on of changgeuk, changing it from something considered difficult and old to something cool.

“I am a reformist when it comes to changgeuk,” she said. “While pansori should conserve its traditional legacy, changgeuk ― which stems from pansori ― should walk hand in hand with the current generation to appeal to larger audiences.

“With the great, enriched ingredient of pansori, we should be able to produce different styles of changgeuk.”

While the transformation of the troupe was acclaimed by many critics and audiences, Kim frankly admits that the past years were very difficult and lonely. “Changing something is always very hard, especially when it was kept as it was for such a long period,” said Kim.

Kim said that some changgeuk actors and fans criticized her for “butchering” the long-held tradition. But she is well aware that a change is always followed by resistance and pain both within and outside of the group.

“But the dreams I had when taking this position mostly came true,” said Kim with a smile.

She says that at the peak of her tenure, another experimental changgeuk is taking place: “Andrei Serban’s Different Chunhyang,” an adaptation of the beloved classical Korean love story “Chunhyangjeon” by Romanian-born American theater director Andrei Serban.

In an interview a few days before the opening night of Serban’s show, she admitted that she was still not sure how it would turn out. Serban is well-known for his iconoclastic and creative style.

“At first, I was very concerned about disassembling our own ‘Chunhyang’ and rearranging it into a new form,” she said. “But in that creative process, Serban kept the beautiful traditional sound and music alive.”

“The sound of pansori has enormous energy that draws people in,” said Kim. “Changgeuk is where the powerful sound and dramatic theatrical performances meet, which cries and laughs with people.”

She is very excited to see “Chunhyang” interpreted from a non-Korean perspective.

Despite her accomplishments as an artistic director, the 64-year-old is better known to the public as an actress. Both her parents were actors and she started acting on stage when she was 5 years old. Though she has many roles these days, including artistic director and professor at Chung-Ang University, she believes that acting on stage for audiences is what she does best.

For this reason, even with her heavy responsibilities as a director, she finds time to act in different performances. Kim recently acted in the monodrama “The Fairy in the Wall,” in which she played 32 different roles.

“I am much indebted to the pansori masters who refined my artistic and musical ability,” said Kim. “This is my way of thanking the troupe and the teachers and helping develop changgeuk (by taking it) to a new level.

“But my real profession is acting and I would like to be on the stage as long as possible, even as a crooked old woman.”