[ The Korea Herald – Send E-mail ]
[Herald Interview] ‘Samsung to be biggest beneficiary of Bitcoin market’
By Kim Young-won
Published : Nov 12, 2014 - 20:40
Updated : Nov 12, 2014 - 20:40
DAEJEON ― A leading Bitcoin organization founder said Samsung Electronics, a chipmaking powerhouse, will likely benefit the most as the global market for the digital currency Bitcoin grows further down the road.

“At least half a billion U.S. dollars, up from $10 million two years ago, will be spent on purchasing Bitcoin mining systems (built using highly efficient chips) worldwide next year or in 18 months,” said Peter Vessenes, chairman of the Bitcoin Foundation, a U.S. organization committed to promoting the use of the cybercurrency, at a news conference Tuesday.

The news conference was held on the sidelines of the Daejeon Global Innovation Forum, a global tech conference taking place in the city of Deajeon from Wednesday to Thursday.

“Much of the money will go directly to foundries with the highest technology in the world, including Samsung, Intel and TSMC,” he added. 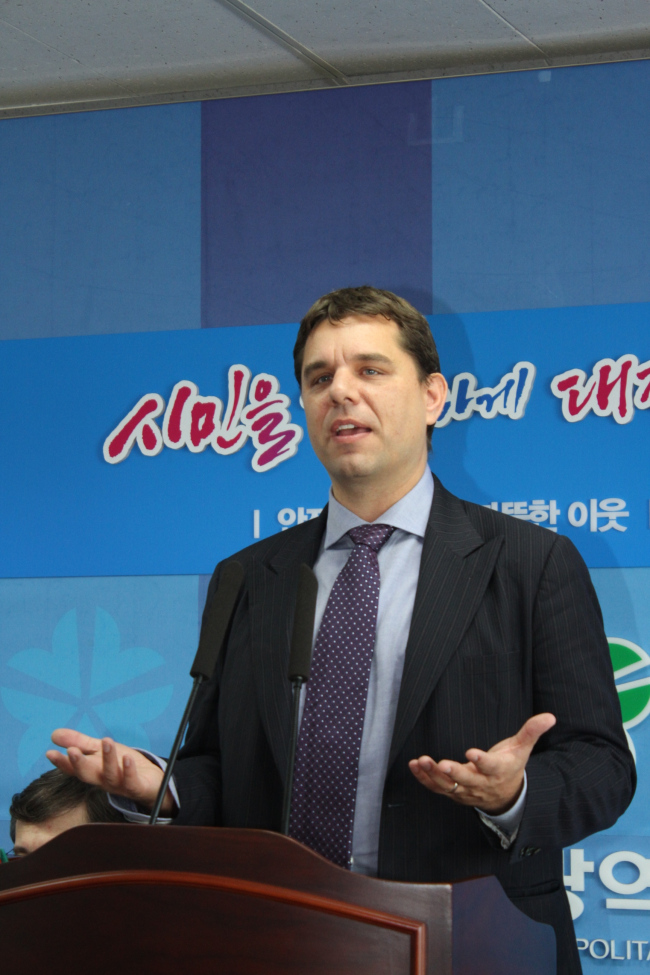 Peter Vessenes, chairman of the Bitcoin Foundation, a U.S. organization which promotes the use of the cybercurrency, speaks about the prospects for the digital currency at a press meeting in Daejeon on Tuesday. (Innobiz Association)
Samsung is one of a few chipmakers capable of producing 10-nonometer-class chips.

Since obtaining Bitcoins requires an enormous amount of computing prowess, those who want to get their hands on the digital currency must be equipped with cutting-edge chip technology and computer systems.

“Because of how Bitcoin mining works, those (who mine) with the most efficient chips make far more money than those with less efficient chips,” the chairman explained.

Bitcoin is also an open-source online payment system where any participant can mine the digital currency on the Web by solving mathematical problems through certain software tools, and trade the digital coins with other “Bitcoiners.”

Financial transactions without the interference of centralized banks is the most important characteristic of Bitcoin, according to its advocates.

Bitcoins caused a stir in the financial, technology and even commerce sectors in Korea earlier this year, but the public interest has subsided due to their inaccessibility for normal consumers and increased concerns over security.

Despite the recent lackluster public interest, now might be a good time to buy Bitcoins because of the downward market trend and the expected increase in the use of the currency in the coming years, according to vessenes.

“Bitcoin has the potential to become a global settlement currency, and something that might compete with the dollar as a way that countries and businesses outside the U.S. could settle their debts with each other,” he said.

Following U.S. tech giant Apple’s announcement that it will allow Bitcoin applications in its App Store in June this year, PayPal, an online payment service provider, teamed up with Bitcoin companies to let users buy things online with the so-called cryptocurrency.

As for Apple Pay, Apple’s mobile payment service launched in October, the chairman said that Bitcoin and Apple’s payment service would not compete with each other since both were still fledgling.

“But we have to wait and see,” added Vessenes, hinting that the Bitcoin businesses should not be caught off guard.

Other tech startups such as personal transportation service Uber have also jumped on to the cybercurrency bandwagon.

The Bitcoin Foundation is in discussions with Korean firms and financial authorities about setting up a Bitcoin foundation in Korea.