[ The Korea Herald – Send E-mail ]
[Herald Interview] Director tackles temp-worker issues
Film director Boo Ji-young talks about her new film ‘Cart,’ inspired by the 2007 Homever strike
By Korea Herald
Published : Nov 6, 2014 - 20:54
Updated : Nov 6, 2014 - 20:54
In her new movie “Cart,” director Boo Ji-young depicts temporary employees of a mega supermarket chain who are facing unfair layoffs. They are ordinary women, including a mother of two kids, a single mom and a college grad. They gather to fight against the company’s exploitative practices.

It takes guts for a novice director to tackle a touchy and complex current issue like that of temp workers. The number of such workers here exceeded 6 million this year, an all-time high. 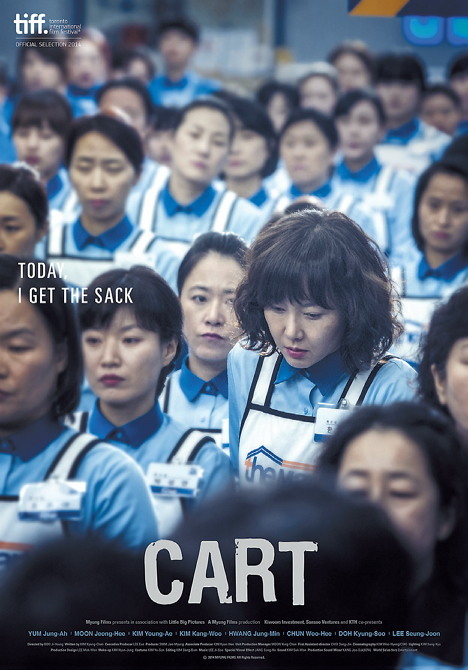 The English poster for “Cart”
However, Boo took on the challenge courageously in her second feature, following “Sister on the Road” (2009).

“The film sheds light on a new and important topic that was never dealt with before,” the 44-year-old said casually as if there was no reason not to direct the film.

“In making any films, I believe there is no reason to be picky regarding the subject matter,” Boo said during an interview with The Korea Herald in Samcheong-dong, Seoul, last week. “The kind of story you are telling, which has to be attractive and moving, is the most important (aspect).” 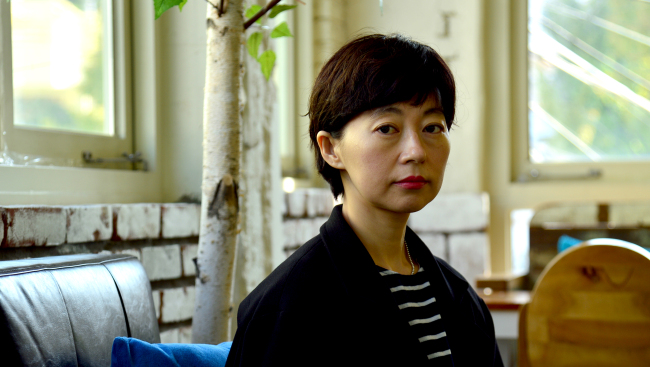 Film director Boo Ji-young poses before an interview with The Korea Herald in Samcheong-dong, Seoul, last week. (Yoon Byung-chan/The Korea Herald)
Her response goes to the heart of the question of what a film director should be. “As a creator of any kind, I think it is important to be sensitive to what is going on and ongoing conversations in society,” said Boo. “Works that reflect the current time are crucial for me.”

Boo thinks that the issues of job insecurity, layoffs and temporary workers are universal ones that transcend borders.

The film received accolades after making its world premiere at the recent edition of the Toronto Film Festival in September. It is slated to appear in other international film festivals.

“First, I thought audiences in Toronto would look at this film in a more rational way,” Boo said. “But surprisingly, they took it more emotionally than I had imagined, with many people tearing up while watching the film.”

Audience members were agitated by a scene in which a convenience store owner smacks a high-school employee out of anger. “The audiences jeered and booed at the scene as if they could not believe this really happens in Korea.”

Traveling to other countries with the film is such an interesting opportunity “because you learn about cultural differences and engage in dialogues,” Boo remarked.

“The interesting thing is that while directors make films based on grand and universal themes, the materials to explain the theme tend to be specific and inherent to certain countries or cultural groups. I think that’s what makes each film interesting and unique.”

In order to weave this weighty issue into her film in a more intriguing and accessible way, Boo researched the subject for years, and talked with employees who were involved in similar labor disputes.

The film is largely inspired by a 2007 incident in which Homever, a supermarket chain owned by E-Land Group, dismissed temporary workers, mostly women, and replaced them with outsourced employees to bypass a new law requiring that employees be given regular-worker status after a certain period. Dismissed employees and labor unions went on strike in front of the supermarket for 512 days until the matter was settled, with some employees reinstated.

“The story is not limited to the Homever incident, though it is fictionalized to fit the screen,” said Boo.

She studied other incidents, including the plight of irregular cleaning staff at major universities in Korea, including Hongik and Yonsei, and other lesser-known occurrences: “This is a daunting issue, happening more often in every part of our society than we are aware of.”

When Boo talked to the protesting employees of Homever, she saw that as time passed, the company harassed workers through various methods, such as selective reinstatement, and forcing protesters to compensate for sales losses incurred during the protest.

“The saddest part of all this is that these company actions only drove a wedge between protesters,” said Boo. “When they have to devote their energy (to fighting) against the company, they end up fighting among themselves.”

Though she knows that she doesn’t have power to change the labor system or bring about political changes, she said she hoped that through the film people become more aware of the issue and engage in dialogue.