He does not know exactly which direction he will take his venture or what specific games he will introduce next.

Like going through a maze of uncharted territory in games he loves to play three hours a day, he likes to use his creative ingenuity to keep guessing what path he will take.

Kwon said all he knows is that 4:33’s games will stay true to being “socially interactive and entertaining,” and that it will develop games by going against the market norms.

“We specialize mostly in making action games that can help people forget about their worries and troubles, and give them a totally different experience. If they cannot be immersed in playing games, then those games would be considered a failure,” Kwon told The Korea Herald.

For instance, its sword-fighting fantasy hit game “Blade” has a virtual keypad that allows gamers to use it like a joystick, which the market watchers doubted would work for a mobile game. In Korea, “Blade” makes 20 billion won ($18 million) a month.

It used gyro technology for the arrow-shooting game “Arrow,” which also defied critics’ claim that it would not work for people playing on subways or buses.

“We do not rely on market data to create entertaining games. It may help, but we follow our intuition and ingenuity,” the chairman said. 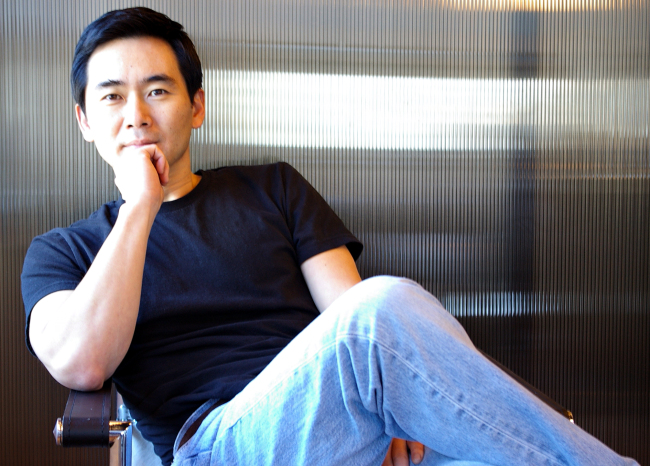 Kwon Joon-mo, chairman of 4:33, a Korean mobile game developer
He encourages his employees to act ahead of time by thinking outside the box, and keeps fans and market watchers guessing about him and the company’s future.

He even keeps them curious about the meaning of his company’s name ― 4:33. One thing is for sure, he says: The name has nothing to do with the experimental song “Four Thirty-Three” by U.S. composer John Cage.

Some claim that 4:33 refers to the time Kwon officially registered his business. But the founder said its meaning would be unveiled when it goes public next year.

“Our chief financial officer is likely to reveal the meaning of 4:33 when we launch an initial public offering here next year,” he said with a laugh.

His passion for games began at an early age, when he used to play video games such as “Galaga” and “Donkey Kong” at arcades after school.

He did not realize this until he studied motivational psychology for his Ph.D. and became a college professor.

Kwon, seeking a challenge, in 2001 set up his first venture, Entelligent, which was known for mobile games based on the Chinese classic novel “Romance of the Three Kingdoms.”

But his thirst for entrepreneurship led him to set up 4:33, which the founder described as a “social interactive entertainment and mobile media business.” Its investors include WeMade Entertainment and Joymax.

“I believe I discovered my entrepreneurial spirit when I started 4:33 because I was so busy and did not know what I was doing when running my first start-up,” Kwon said.

“My next step could be making never-before-seen games integrated with TV dramas or other media platforms, and certainly help accelerate start-ups by young entrepreneurs.”