Korea’s environmental industry is stepping up a foray into the flourishing market, especially in developing countries, capitalizing on technology, knowledge and experience accumulated through the country’s rapid industrialization and fight against pollution.

At the vanguard of the efforts is the state-run Korea Environmental Industry and Technology Institute, which assists the nation’s small and medium-sized companies in financing, research and development, and overseas marketing.

“We are engaged in the whole gamut of work for the industry, from technology development to industrial promotion, from authentication of eco-friendly products to a green lifestyle campaign. Over the past years, our role has been greatly expanded,” KEITI president Kim Yong-joo told The Korea Herald.

Since taking office in March, the former professor of environmental economics has been working to set a new vision commensurate with its ever-expanding role as the key driver of environmental sustainability, technological innovation and overseas exports.

“The core value is sustainable development necessary for KEITI to take a leap forward as the central agency of environmental welfare, which brings together the environment and economy,” he said. 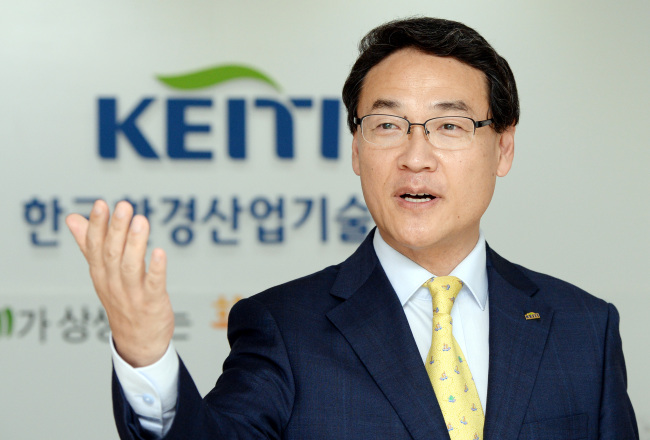 The new policy calls for increased attention to resources recirculation, environment-related health and safety, antipollution efforts and the spread of eco-friendly goods and lifestyles.

The agency has been leading a nationwide drive to encourage environment-friendly consumption through a series of product certification programs.

Kim said that green industries would play a key role in the Park administration’s new growth paradigm of the “creative economy.”

By fostering new growth engines and profit models in the field, KEITI seek to contribute to the government’s creative economy vision, he said.

From sewage management to waste recycling to water and air purification, Korean companies boast advanced technologies and practical know-how. But most of them are small in terms of capital and workforce and lack financial and marketing resources to fulfill their potential.

“One of our key tasks is to support small- and mid-sized enterprises that have outstanding technologies but lack the resources to commercialize them,” Kim said.

KEITI was established in 2009 through a merger of two state-run agencies involved with environmental research, commercialization of green technologies, export support and eco-labeling.

During the same period, KEITI has arranged a total of 733.6 billion won worth of government research and development investment in green technology, with annual volume increasing from 116.1 billion won in 2009 to 169.3 billion won last year. 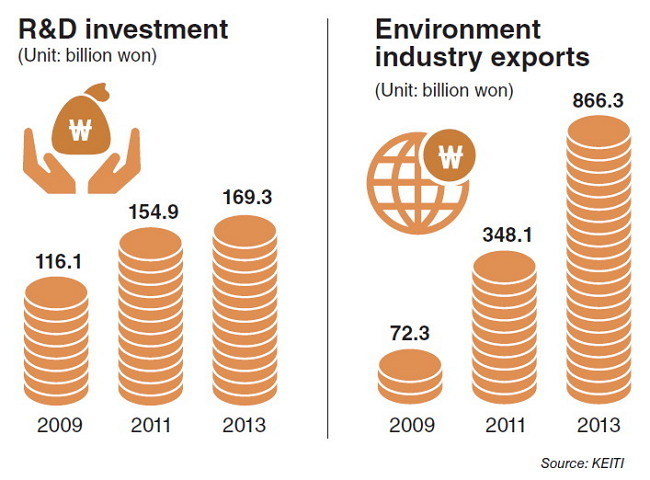 According to industry think tanks, the global market for environment-related products, services and technologies was worth $796 billion in 2010 and is projected to grow an average of 3.2 percent annually to reach $1.86 trillion by 2020.

Under a national goal to join the ranks of the world’s top 10 green industry powerhouses by 2020, KEITI will sharply increase and diversify its support programs.

Customized services and solutions to meet local needs and government-level collaborations are key to Korean firms’ advance into new markets, he said.

For environmental improvement projects in emerging and underdeveloped countries, KEITI has been offering package programs combining planning, funding and implementation, in cooperation with large and small Korean companies, the Korean government and local administrations.

For example, in a Korea-Indonesia project to restore the Ciliwung River in the Indonesian capital in 2012, the Seoul government provided 60 percent of the funding in the form of official development aid. Another 20 percent came from KEITI and the remaining 20 percent was provided by the Indonesian government.

“This year, we are focusing on African and Central and South American countries as part of efforts to diversify export destinations,” Kim said.

He visited Colombia and Costa Rica in June, leading a 25-member delegation including Environment Ministry officials and SME CEOs.

KEITI has also been actively cooperating with the international community to reduce carbon emissions and promote sustainable development.

It has been designated as one of the Asian representatives to the United Nations in the division of sustainable consumption and production policies.

Kim is a board member of the U.N. 10-Year Framework Programmes on Sustainable Consumption and Production, and cochair of the Asia-Pacific Regional Meeting on 10YFP.

He formerly worked as vice president of Seoul Digital University. He received a master’s degree from the University of York in Britain and a doctorate from Newcastle University, both in environment economics.