But this is when the backstage area comes to life. One by one, cast members arrive for the night’s show ― “Chicago,” a timeless Broadway hit now on its 10th run in Korea.

Ivy, who plays the show’s lead character Roxie Hart, is one of the first to arrive. With a friendly and cheerful hello, she greets everyone she meets, even the cleaning ladies.

“It almost feels like I have become an office worker commuting to an office here every day,” she said in her dressing room one Wednesday afternoon, adding that she feels a strong sense of belonging here.

“The quality of my life has never been this high, because I get to do what I love to do ― singing and dancing ― every day, together with people I like. Plus I get paid for this!”

Musicals have been a huge part of the 31-year-old performer’s career and life for the past few years.

She spent much of her time in this theater, located in southwestern Seoul, rehearsing, performing and hanging out with her cast mates.

Here, she played Molly, the female protagonist in a musical adaption of the film “Ghost,” for eight months till the end of June.

She came back only a few days later, as rehearsals began for “Chicago.” The show raised its curtain on Aug. 2 for a two-month run. Although double, triple or even quadruple casting has become virtually an industry norm in Korea, the show is single cast, meaning that Ivy has to perform eight times a week for two months in Seoul and then for a few more weeks in provincial cities. 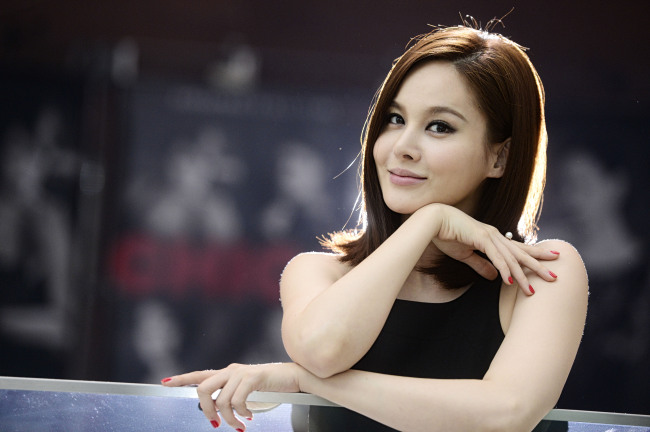 Ivy. (Park Hae-mook/The Korea Herald)
“I am so into musicals now. I love being in musicals,” she said. “As a singer, you’re all alone. It’s your song, your performance and your stage. But as a musical actress, you’re part of a team. I love that,” she said.

A biting satire of show business, the press and the legal system, the musical is the story of Roxie in 1920s Chicago who idolizes Velma, a headlining entertainer. The two end up in jail for murder and become rivals in the quest for fame. Roxie shot her lover while Velma killed her husband and sister who were in bed together.

The show, which debuted on Broadway in 1975, is relatively simple with hardly any changes in costume or stage set, compared to today’s big, spectacular musical shows. Its success relies heavily on the cast, particularly the two leading ladies, and their delivery of the show’s powerful numbers, including “All That Jazz,” and choreography.

It is Ivy’s second time playing Roxie. In 2012, she played the role, again opposite Choi as Velma, and won the Korea Musical Award’s best rookie actress award for the performance.

Does that make her any more confident on stage?

“The more I get to know and learn about musicals, the more I realize how poor I am on stage. That makes me want to work harder.”

Just like in the show, Ivy idolizes Choi, a veteran musical actress who has been in every run of the show since its premiere in 2001. It is her eighth time playing Velma. The other times, she was Roxie.

“Like her, I want to play Roxie as long as possible,” she said.

“Chicago” is special for her in many ways, she said. It was this show and this role that inspired her dream of becoming a musical actress. The story resonates with her, as she was personally a witness to the dark side of show business.

In 2005, she made a wildly successful debut, instantly earning a name as a sexy diva. Her high-flying career took a devastating blow two years later when a scandal broke involving her ex-boyfriend. Legal wrangling with her former agency followed, keeping her away from the K-pop scene for years.

“I debuted nearly 10 years ago, but the period when I performed as a singer is probably about two years in total,” she said.

“But because of all that, I learned to appreciate the small things in everyday life. Now I have an inner conviction that even if something comes up again and I can’t sing anymore, that will not be the end of my life,” she said.

“This kind of mindset actually enables me to enjoy work more now.”

Ivy has so far released three full studio albums and two mini albums ― with the latest one released last year.

She has no current plans for a new album, and will instead pour herself into “Chicago” to perfect her stage acting craft, she said.