[ The Korea Herald – Send E-mail ]
[Herald Interview] KOICA seeks balanced, sustainable aid
By Shin Hyon-hee
Published : Aug 18, 2014 - 20:53
Updated : Aug 18, 2014 - 20:53
Korea’s 2010 enrollment in the OECD’s Development Assistance Committee was a milestone in the history of its economic growth, epitomizing its unprecedented ascent from a war-stricken backwater to an aid donor.

The country has since been scaling up its aid commitments and personnel to help the developing world fight poverty, disease, climate change and other grave challenges. Last year, it doled out more than $1.74 billion in official development assistance as the world’s 16th-largest patron.

At the vanguard of the globetrotting mission is the Korea International Cooperation Agency. The organization in charge of Seoul’s grant aid carries out programs in some 46 nations in such areas as health care, education and infrastructure construction, with the scale of its volunteer corps nearing 2,000.

With demands skyrocketing for Korea’s know-how, KOICA President Kim Young-mok stressed the need for a more holistic approach that balances national interests and the needs of different state agencies while inducing private investment to boost its projects’ sustainability.

“We’re receiving requests for a partnership from countries in all layers of the world economy. Poor countries see Korea as a model for growth without hegemony, other middle powers seek a joint foray into emerging markets, and advanced ones value our unique style of development,” he said in a recent interview with The Korea Herald. 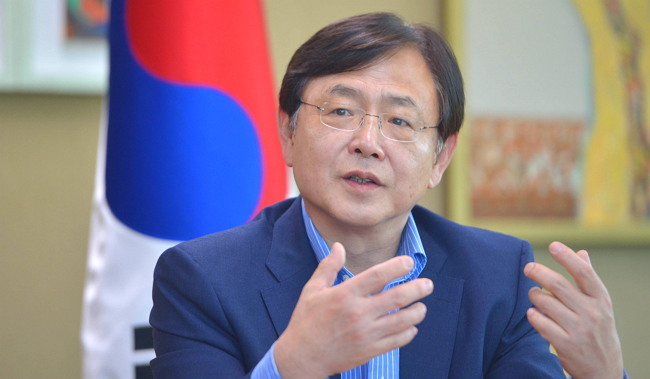 KOICA President Kim Young-mok. (Kim Myung-sub/The Korea Herald)
“Given our limited resources, we need a delicate balance ― whether it be between loans and grants, or traditional partners and those in urgent need of help.”

The former ambassador to Iran took the helm of the Seongnam, Gyeonggi Province-based agency in May 2013, bringing with him 35 years of diplomatic and field experience.

While at the Foreign Ministry, Kim took up various key posts including consul-general in New York, deputy executive director at the Korean Peninsula Energy Development Organization, minister at the permanent mission to the U.N. and deputy director-general for North American affairs.

Despite Korea’s recent feats, criticism has grown over the relatively small scale of its ODA, a heavy focus on loans compared to grants, and fragmented policies among state agencies.

Experts and relief workers have also called for a diversification of beneficiaries to include least developed countries based on humanitarian concerns rather than economic interests. From 2008-12, more than 55 percent of the country’s ODA was provided to Asia, in particular Southeast Asian countries, and the bulk of the remainder to energy-producing nations in Africa and Latin America.

“While promoting flexibility in national strategy, we should step up support particularly for war-devastated countries and refugees from disaster or conflict zones in line with the post-2015 global development agenda,” Kim added.

In 2013, Korea funneled $1.3 billion into bilateral assistance, consisting of $800 million in grants and $500 million in low-interest loans, and $450 million in programs run by international organizations.

The tally marks a 9.2 percent yearly increase. But as a ratio of gross national income, it represents a paltry 0.13 percent, far lower than the 0.3 percent rich-world average.

The government’s 2015 goal of raising the proportion to 0.25 also appears far-fetched given budgetary constraints.

While the share of loans in Seoul’s ODA has gradually risen, most of the 28 DAC countries except the U.S. and Japan strive for the 100 percent grant principle.

“Globally, the total amount of ODA has been hovering at similar levels in recent years in the face of economic woes,” the former career diplomat noted.

“As they saw a spike in foreign direct investment and their reliance on private investment, many countries have expanded grants because developing countries don’t have much capacity to repay loans.”

In addition, conflicting goals between the Finance Ministry, the Foreign Ministry and the Prime Minister’s Office have long been blamed for fueling tension and eroding the aid’s overall effectiveness. Officials from the Paris-based DAC, the U.N. and other nongovernmental agencies have taken issue.

Many diplomats complain that the Finance Ministry resists calls for a rise in grants while sharply ramping up its own loans program. Economic policymakers, for their part, say they have been struggling to prop up public finances amid listless growth that takes its toll on tax revenues and their long-pursued ambition to balance the country’s books.

To tackle the concerns and boost program efficiency, KOICA is striving to step up cooperation with other agencies such as the Export-Import Bank of Korea.

“We’ve been grappling with coming up with a project that could create synergy because the resources are limited yet so many stakeholders claim their parts,” Kim noted.

“We’re trying to work with the bank from the planning stages to incorporate grants and loans little by little. But inevitably there are limits because the two are different organizations in nature and have different standards.”

With a new international development framework underway, Kim stressed the significance of inclusiveness, sustainability and climate change in shaping future assistance efforts. He is also committed to intensifying cooperation with the private sector and civil society.

“The concept of public-private partnership used to be mainly about us taking applications and then providing financial support for the winner. We want to upgrade that to a more mutual one in which KOICA and the contractors actually work together throughout the process, backing each other up and raising the project’s sustainability,” Kim added.

“I think sustainability is key. In the end, it’s all about building administrative, technological and business capacity.”