“Central Asia is becoming an important region to South Korea as a growing number of Korean companies have been making inroads into the countries, which have abundant natural resources and high growth potential,” said Shin Won-sop, minister of the Korea Forest Service, in an interview with The Korea Herald.

“I hope the advanced forestation technology of the Korea Forest Service will be a big help to the balanced growth of the region’s economic development and environmental conservation.”

The Korea Forest Service, a government agency specializing in the country’s forestry, has carried out diverse forest restoration projects and forged partnerships with Central Asian countries in the past few years.

Last October, the agency signed a memorandum of understanding with five countries including Kazakhstan, Kyrgyzstan, Uzbekistan, Tajikistan and Turkmenistan in a bid to share Korea’s forest expertise and to boost cooperation in restoring the damaged forest ecosystem in the region.

As follow-up measures to the agreement, the agency conducted a field investigation in the dry area of the Aral Sea, in partnership with Kazakhstan’s environment ministry, that same month. The Aral Sea in Central Asia was once one of the four largest lakes in the world, but has quickly been shrinking due to the setup of hydroelectric power plants in Tajikistan and the water use of cotton fields in the regions.

The Korea Forest Service said in July that it would invest $87 billion over the next 10 years in reforestation of the region by setting up tree nurseries and conducting joint research on forest restoration with Kazakhstan’s environment ministry. 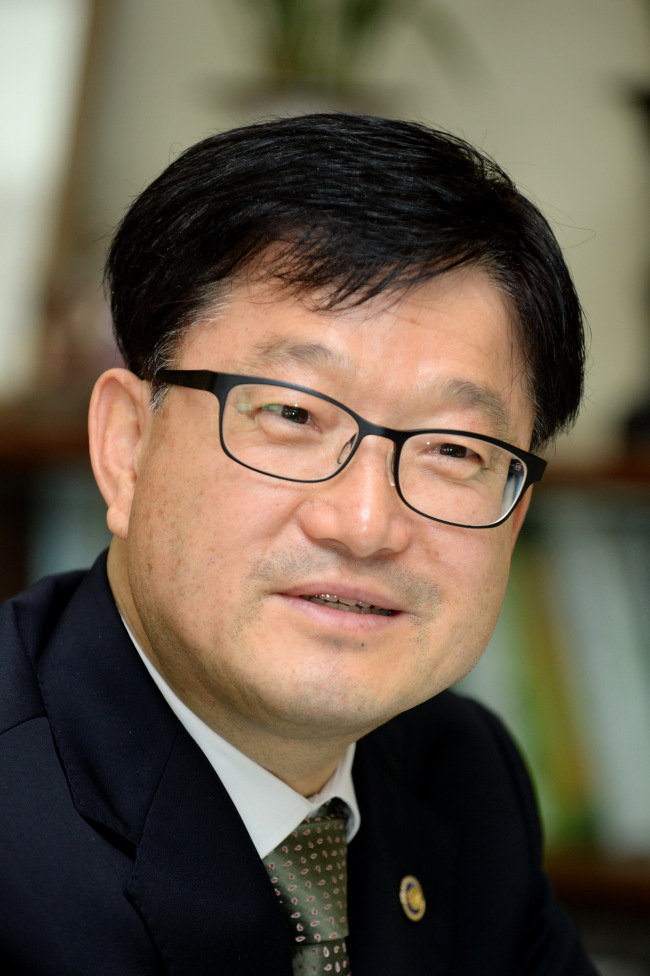 Shin Won-sop, minister of the Korea Forest Service. (Korea Forest Service)
“On top of the Aral Sea, we plan to help restore damaged areas of 50,000 hectares across Central Asian regions though various forest cooperation projects by 2020,” he said.

The government agency will also hold a workshop in Seoul for the Aral Sea project this November, inviting experts from international organizations including the World Bank and the Food and Agriculture Organization.

The agency plans to expand the forestation partnership with other Asian countries. South Korea signed a memorandum of understanding on forestation with ASEAN countries in November 2011, and took the lead in setting up the ASEAN-ROK Forest Cooperation, or AFoCO, in August 2012.

AFoCO is an international organization designed to contribute to Asia’s green growth and the fight against climate change by bolstering regional cooperation in the forest areas. Its main projects include forestation, the development of fuel forests, forest sustainability, training manpower and technology development.

“Currently, we have 11 member nations from ASEAN countries, but we plan to include more Asian countries including Kazakhstan, Mongolia, Bhutan and East Timor by 2015,” he said.

The agency plans to support Asian countries through Reducing Emissions from Deforestation and Forest Degradation in Developing Countries, or REDD+ projects.

The REDD+ is the United Nations’ effort to create financial value for the carbon stored in forests, offering incentives for developing countries to reduce emissions from forested lands and invest in low-carbon paths to sustainable development.

“Indonesia, the world’s No. 3 nation in terms of tropical forestry, has high potential for securing emission trading through the REDD+ projects,” Shin said.

The agency has been jointly developing forest technologies with Indonesia’s government officials and local people to reduce carbon emission from desolated tropical forests.

“We think the regional development through the participation of local people is also very important, apart from environmental preservation. We hope to share this Korean version of REDD+ projects with more Asian countries,” he said.