[ The Korea Herald – Send E-mail ]
[Herald Interview] No room for N. Korean nuke test: CTBTO chief
By Shin Hyon-hee
Published : Aug 13, 2014 - 21:41
Updated : Aug 13, 2014 - 21:41
Amid persistent concerns over its fourth underground blast, North Korea should put a moratorium on nuclear testing and join a global treaty to outlaw it, the head of the agency monitoring the ban said Wednesday.

Lassina Zerbo, executive secretary of the preparatory commission for the Comprehensive Nuclear-Test-Ban Treaty Organization, called for greater international pressure to stop Pyongyang from further beefing up its nuclear capabilities, saying that North Korea was the only country that has carried out an atomic test in the 21st century.

“Our role is indeed to try to persuade all countries that there is no room for nuclear tests anymore in the 21st century,” he said in an interview with a group of reporters.

“When you see what has happened after the Cuban missile crisis, we’ve moved from 1,000 nuclear tests to nearly none, but only those three from the DPRK (North Korea).” 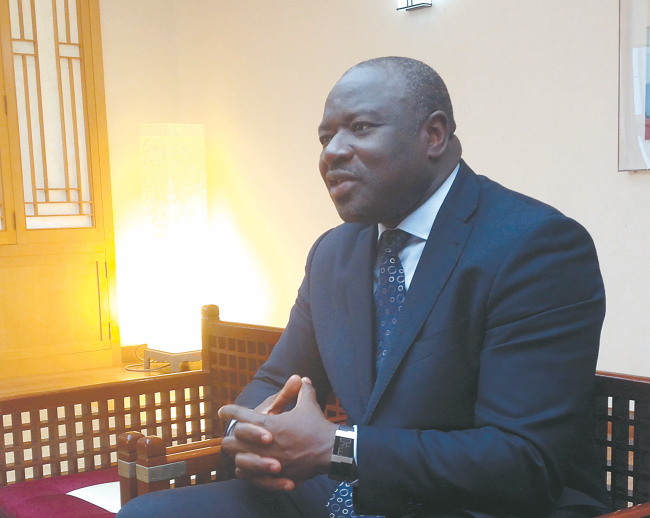 Lassina Zerbo
The communist country has tested its atomic devices three times, in 2006, 2009 and 2013. Concerns have grown after it repeatedly threatened a “new form of nuclear test” in March.

“We, together with the international community, urge the DPRK to join the consensus on nuclear testing and then the moratorium, and to contribute to regional peace here and ultimately international peace and security,” Zerbo said.

“Together, we can find a solution for North Korea to understand that there is no room in the 21st century for nuclear testing, and peace and security will be able to develop on the peninsula to the needs of your population.”

The Vienna-headquartered CTBTO was set up in 1996 to oversee the ratification and enforcement of the treaty. It has been seeking to step up its monitoring capacity by installing 337 stations worldwide, about 90 percent of which are nearing completion, according to Zerbo.

The Burkina Faso-born physicist took the helm of the agency in August, after serving as director of its international data center since 2004.

Skepticism, however, has risen over the fate of the CTBT as it cannot come into effect because eight nuclear states including the U.S., China and Iran have not signed or ratified the treaty and will unlikely do so in the near future. Of the holdouts, North Korea, India, Pakistan and Israel are not part of the nuclear Non-Proliferation Treaty.

Currently, 183 countries have signed the accord and 162 of them have ratified it.

Backed by its potent international monitoring system and broader global support, Zerbo vowed further efforts to get more countries on board and expedite further technical progress, while preventing any “treaty fatigue.”

“For any of the eight, ratification is necessary for the treaty to enter into force. So we will pursue discussions through many means, reaching out to the international community and reaching out to political figures,” he added.

“Our effort is to make sure that, with the work we do, the preparatory work and what we’ve achieved so far, we’re trying to convince them that we’re effective to get the compliance with the treaty that was negotiated for so many years.”

The executive secretary was on a four-day tour to the country that included visits to the state-run Korea Institute of Geoscience and Mineral Resources, the Korea National Diplomatic Academy and the Demilitarized Zone.

During talks later in the day with Foreign Minister Yun Byung-se, they agreed to boost cooperation to preclude Pyongyang’s fourth nuclear experiment and bring about the CTBT’s early entry into force, the ministry said in a statement.