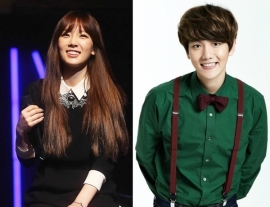 “They have been close senior and junior, but recently started to have feelings for each other. The relationship is in its early stage,” said an official from the agency.

Earlier in the day, the rumor surfaced that Taeyeon and Baekhyun have been dating for four months.

The news broke after Korean online entertainment news outlet Dispatch unveiled photos of the two in a car, supposedly on a date, that were taken around dawn near EXO’s accommodations in Seoul.

According to the news reports, Taeyeon headed to Baekhyun’s dormitory, located in eastern Seoul at 2 a.m. to pick him up. They parked the car on a side road, where the alleged couple enjoyed time together.

“Baekhyun has said that Taeyeon was his ideal type, and Taeyeon found him cute. At the end of last year, they confessed their feelings to each other and started a romantic relationship in February this year,” a source familiar with the two was quoted as saying.