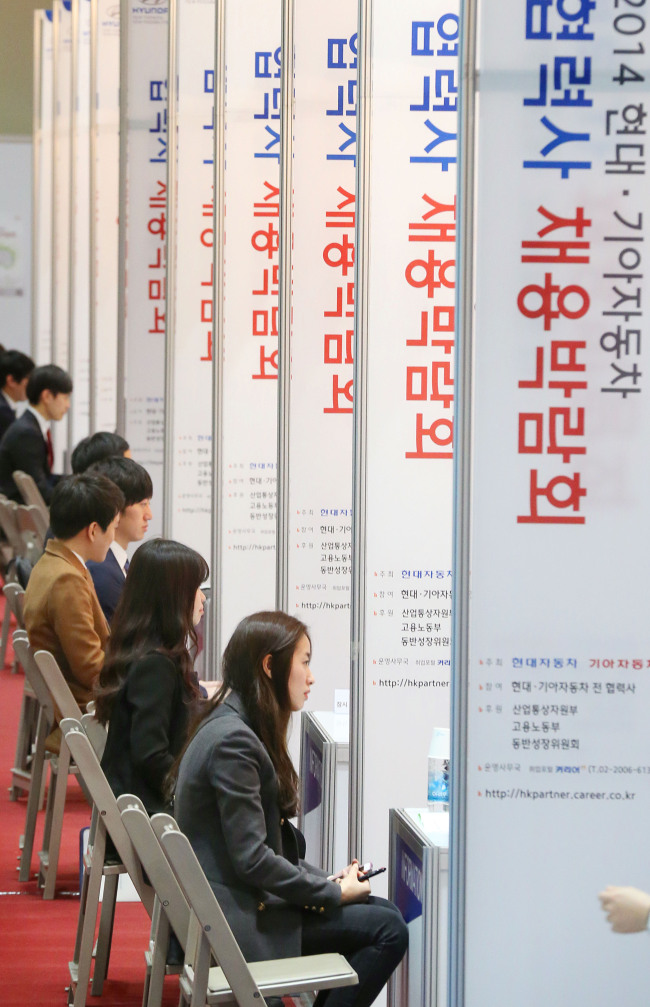 The country’s output has been growing thanks to exports. Its consumer spending has picked up on the back of growing welfare financing by the government.

Still, Asia’s fourth-largest economy is finding it hard to create jobs for college graduates, even while they pull all-nighters at libraries to pass conglomerates’ corporate entrance exams.

Korea’s youth joblessness, which passed 10 percent in February, has become a bigger problem than the rapidly aging population. 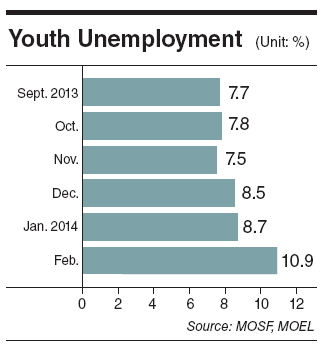 The country’s overall employment rate of over 64 percent is on par with the OECD average. But for those aged 15 to 29, the employment rate is barely above 40 percent. Analysts say the figure is odd, given that overall job figures have been increasing.

Several factors contribute to Korea’s increasing youth unemployment, such as Korean men’s mandatory military service forcing them to delay job hunting and the lack of career opportunities for young women.

But the underlying problem is a surplus of overeducated young people with very little practical experience who seek a limited number of jobs offered by leading conglomerates such as Samsung and Hyundai Motor, which account for more than half of the country’s job growth.

Considering the amount of time and money the young spend on their education, they and their parents want their investments to pay off by securing a stable job at a conglomerate.

And having graduated with higher degrees, most of them have high standards, refusing to even submit their resumes to small and medium enterprises that are in dire need of human capital but cannot meet the young job hunters’ expectations.

Then, can encouraging these jobless young people to be their own boss by establishing start-ups be a solution to Korea’s problem?

Sadly, the answer is no. Starting a business is much more difficult than getting a job in this country, where the education system rarely focuses on teaching the young about entrepreneurship but instead prefers rote learning.

Industry observers called on fundamental changes in education in order to overcome this barrier to achieving 70 percent employment.

“Policies should be expanded to having not only colleges but also secondary schools teach students about entrepreneurship,” suggested a researcher at the state-run Korea Development Institute in a report.

This would be win-win for both job seekers and recruiters, to begin with.

Analysts said that Korea should further realign its policies ― whether welfare, financial or monetary ― to include not only boosting jobs for the elderly amid the aging society but also the young.

As Nobel laureate and economist Joseph Stiglitz said in his book “The Price of Inequality,” the best kind of welfare is when everyone has a job.