“You have to be quite sensible when talking about musical productions. It is business after all and it needs to generate profits,” Lauren Park, head of live entertainment at CJ E&M, told The Korea Herald. The company is said to have accounted for 30-35 percent of the 300 billion won Korean market for musicals in 2013.

“Because it takes a lot of time and effort to create one, a musical needs to be staged not only at home but also abroad for an extended run so that as many people as possible can watch it. If it gains prominence on the global scene, it will become a profitable business,” she said. 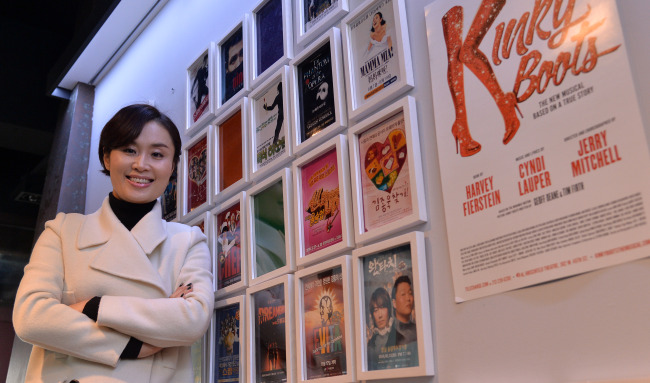 Lauren Park, head of live entertainment at CJ E&M, poses for a photo prior to an interview with The Korea Herald on March 11. (Lee Sang-sub/The Korea Herald)
As successful larger-than-life musicals, which have established themselves as flagship pop culture icons through decades of performances around the world, she cited “Phantom of the Opera,” “Les Miserables” and “Miss Saigon.”

CJ E&M, the entertainment division of the local conglomerate CJ Group, seeks to co-produce two musicals adapted from films, “August Rush” and “Back to the Future,” at Broadway and West End theaters.

CJ E&M is scheduled to hold a workshop later this year for the staging of “August Rush” on Broadway, while it looks to debut “Back to the Future” in London’s West End by the end of next year.

“We thought it was time to take a risk or take a step further to introduce Korean musicals to overseas audiences. We have decided to produce one targeting a global audience and utilizing global resources from the beginning,” Park said.

Broadway and the West End are full of people who have abundant experience and know-how, and have great systems and facilities. And they also have the most important factor, a strong brand image, something that CJ wants.

She believes that the storylines of the two musicals are universally relatable and convincing.

“For instance, you may think ‘Back to the Future’ is just a comedy. But inside it tells the story of a boy who gets to understand his parents after a traveling in time to the past, in which he befriends them and lives out good and bad times together,” she said. “I know that search for identity and parent-children issues always evoke sympathy,” she added.

CJ has also participated in the production of Broadway show “Kinky Boots,” which will be staged in Korea in November.

CJ is one of investors in the musical, which tells the story of a failing shoe factory that turns itself around by making shoes for drag queens. It made the investment with a belief that minority is a theme which will never fail to rouse audience sympathy. 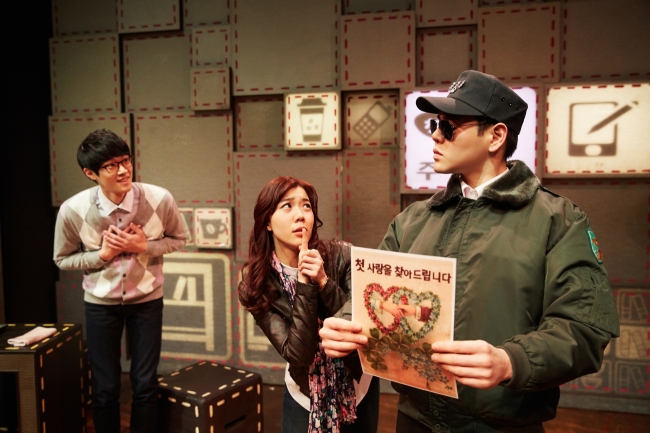 A scene from Korean musical “Finding Mr. Destiny.” The musical also had a Chinese run in Shanghai last year. (CJ E&M)
Ahead of “Back to the Future” and “August Rush,” CJ’s original musical “Finding Mr. Destiny” was introduced in Japan and China. Staged about 3,500 times since 2006, the tale of a woman in her 30s who travels the world to find her first love has achieved critical and commercial success.

Park explained that the secret formula was simple: Everyone has an unforgettable first love.

“Pick anyone on the street and ask them about their first love, and they can talk for a long time, for half an hour. The main demographic of the musical industry is women aged from 25-35, and they are passionate about the subject. I believe that people in Japan and China are no different,” she said.

Minor revisions are made to catch cultural nuances. In staging “Finding Mr. Destiny” in China, the cranky, authoritative retired soldier, who is the father of the main character, becomes a doting father who worries about his daughter’s marriage in order to reflect the more gender-equal atmosphere. Still, it touches on issues of father-daughter relations, independence from parents and other related themes, Park said.

In a bid to secure more original, universal plays, CJ has been running the “Creator Lab System” involving playwrights, directors and others to work out creative content. Once a week, scores of creative minds gather and discuss their work to see if it could be made into cultural content that can strike a chord with audiences both at home and abroad.

“(The meetings) last four or five hours. Our debate goes in detail as well as dealing with the big picture. It’s tough. But it feels great. It is a great investment in the future,” Park said.