[ The Korea Herald – Send E-mail ]
[Weekender] Deja vu
Nostalgia for ’90s sparks retro culture boom
By Lee Woo-young
Published : Mar 7, 2014 - 20:41
Updated : Mar 7, 2014 - 20:41
The 1990s were a culturally vibrant decade that saw the birth of the legendary boy band Seo Taiji and Boys and first-generation idols like H.O.T. and Sechs Kies. It was the beginning of what we now call K-pop, and a period when Korean popular culture, especially movies and TV dramas, made great strides both in style and content.

The decade is often hailed as Korea’s cultural heyday and continues to inspire popular culture.

The culture of the ’90s first re-entered the Korean mainstream with the movie “Architecture 101,” released in March 2012. The story about a man and a woman recalling their first love at college in the ’90s took viewers on a nostalgic journey. The model house on Jejudo Island that the male protagonist built for his first love became an instant tourist attraction. The 1990s songs featured in the movie became popular again, offering viewers in their late 30s and early 40s a chance to reimmerse themselves in ’90s sentiment.

After the success of the movie, a string of TV dramas, movies and songs followed. The recent hit TV drama series “Answer Me 1997” and “Answer Me 1994” made ’90s culture not just a subject of nostalgia, but an attractive cultural product. 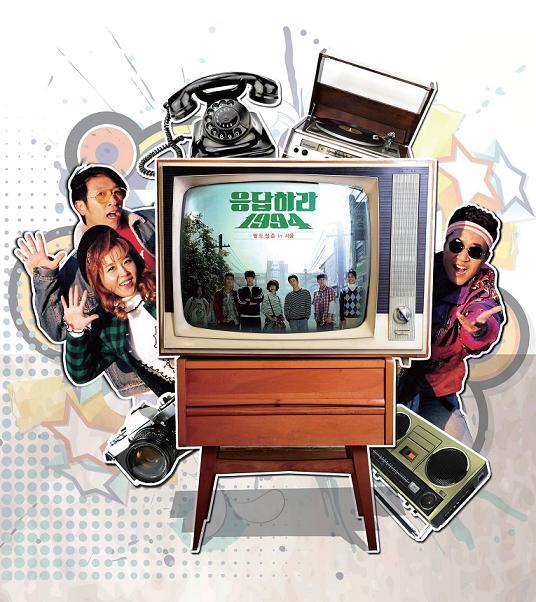 (Graphic by Park Gee-young)
Achieving the highest viewership among cable channels, the “Answer Me” series gave viewers in their 30s and 40s a chance to reminisce. But it was also entertaining for the younger generations.

Songs featured in the drama topped major music charts. Seo Taiji and Boys’ “To You (Neo-ae-gae),” released in 1993, was remade by Sung Si-kyung and included on the drama’s original soundtrack. Another ’90s hit song, “With You,” reappeared on the music charts as a cover version sung by the boy group B1A4.

The ’90s revival has been seen in other fields as well. In fashion, overalls, bulky sweatshirts and hip-hop-style jeans reminiscent of ’90s fashion have made a comeback. In K-pop, the three-member group Koyote, which debuted in 1998, rejuvenated ’90s nostalgia with their EP titled “1999” that highlighted the distinct fashion of the time.

Why is the 1990s making a comeback in pop culture?

“People have always wished to revive the good memories of their youth. For older generations, the 1990s culture is a comfort,” said culture critic Suh Byung-kee.

Those who grew up in the ’90s are now in their early 40s. They constitute the largest group of economically active people and are major consumers of cultural products.

“Answer Me 1994,” which aired from October to December 2013, successfully drew them into the world they remembered. Major events in the everyday life of each character were portrayed in detail. One episode showed how people reacted to the collapse of Sampoong Department Store, the most popular and luxurious shopping center in Seoul at the time. People couldn’t call their friends and family members with a cellphone because most didn’t have one. Instead, they paged each other. At a concert of the legendary folk singer Kim Kwang-seok, the audience heard the tragic news from the singer in the middle of the show.

“Those details instantly took viewers back in time to the 1990s,” Suh said.

Nostalgia wasn’t the only reason why “Answer Me 1994” and “Answer Me 1997” were huge hits. Another factor was their links with the present, according to culture critics. The drama showed what the characters would become when they were in their 40s and how each important moment in their lives determined their future.

“Female fans who go crazy over Seo Taiji and Boys and other idol groups don’t just end up being crazy fans. They later become writers for TV productions, anchors and art curators. And what they were madly into in their teenage years started to make sense when looking at what they are doing now,” said Suh.

Not every TV drama, movie and song featuring retro culture has become a hit.

Koyote’s “1999” didn’t draw as much attention as the group expected. The movie “Boiling Youth” lost the popularity battle against “Miss Granny” although both movies, released on the same day in January, featured the same retro culture code. While “Boiling Youth” depicted the lives of troubled teenagers in a suburb in Korea, “Miss Granny,” set in the present, portrayed an old woman who suddenly becomes physically young and lives the life she always wanted. “Miss Granny” attracted more than 6 million viewers while “Boiling Youth” had just over 1 million.

“Retro should not just remain a trend that existed in the past. It should mean something to the current generations as well,” said culture critic Jung Duk-hyun.

Culture critics say the recent success of movies and dramas based in the 1990s has to do with sentiments that everyone has felt before or is longing to feel. In “Answer Me 1994,” college students from each province live in a “hasukjib,” or boarding house. They create friendships and close ties like those of a family as they live together.

Jung said the retro phenomena was no longer a one-time trend, but would be frequently appear in popular culture in the future.

“The retro boom is not a fad anymore. It will be constantly featured in popular culture as long as people wish to feel young, reminisce nostalgically and discover values they’ve been missing,” said Jung.

Suh predicts another retro boom based on the 2000s.

“It will show completely different points of view and trends because what young generations shared in the 2000s is totally different,” he said.