Poking fun at the generational gap between the youth of today and the middle-aged, the cartoon is a reminder of the inevitable differences in culture and shared memories between different generations.

However, at a small bar-club in Hongdae ― decorated with shelves full of old LP records, vintage tables and a DJ who plays music from the ’70s, ’80s and ’90s on an old record player behind a rusty DJ booth ― age or status does not seem to matter.

“There is one main thing that can bring together different generations ― music,” said Kim Jin-ho in an interview with The Korea Herald. Kim is the CEO of the retro-themed bar-club Bamgwa Eumaksai (a.k.a. Bamsa), which roughly translates to “between night and music.” He operates 21 Bamsa throughout Seoul and one each in Gwangju and Busan, with a total annual revenue of 20 billion won ($18.8 million). 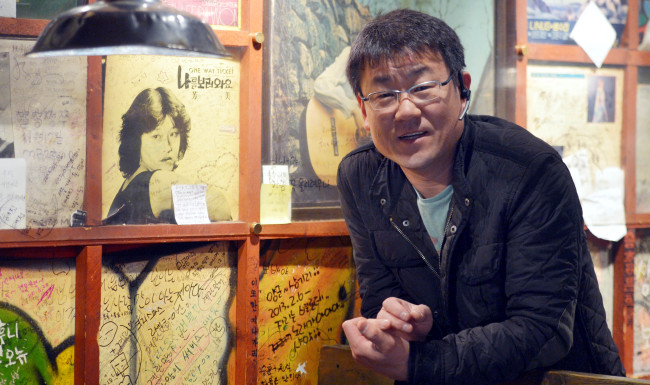 Kim Jin-ho, CEO of Bamgwa Eumaksai, a retro-themed bar-club, poses during a recent interview with The Korea Herald at one of its branches in Hongdae, a district in Seoul known for arts, music and entertainment. (Kim Myung-sub/The Korea Herald)
On a recent night at Bamsa, customers ranging from a female student in her late 20s to an aging office worker in his early 50s swayed shoulder-to-shoulder while singing in unison to veteran Korean singer Choi Ho-sup’s “As Time Goes By” (1988). Soju glasses were clinked across tables while people sang along to all-time favorite “Though I Loved You” (1991) by Kim Gwang-suk.

When legendary K-pop tracks Seo Taiji and Boys’ “I Know” (1992) and H.O.T.’s “Candy” (1996) started blaring, the air filled with excitement. With a dose of alcohol, strangers became best buddies as they cheered in unison and danced together around the tables. As the hours passed, people sat back to enjoy the good company and old tunes.

Meanwhile, the basement of Bamsa was a haven for anyone who wanted to relive the nightclub experience the “old way.” Dimly lit, crowded and featuring dance music predominantly from the ’90s, the space was filled with people ― most of them in their 30s ― shaking and moving to old hits such as Koyote’s “Soonjung” (1999).

Bamsa became famous as a venue that only plays music from the ’70s to the mid-’90s, with each day’s playlist arranged by the CEO himself. This is not because Kim disapproves of modern songs; in fact, he believes that there is no such thing as “bad music.”

However, he believes that there were many more heart-moving “masterpieces” that truly speak to listeners in the past decades compared to today.

“Mega-hit songs have an immense staying power that propels people to love them and sing them with the same enthusiasm, generation after generation,” said Kim. “They are perhaps the only songs that continue to have wide appeal and can be sung en masse.”

Kim arguably has a background that gives him the authority to make such claims about music. A fervent music lover from a young age, Kim began working as a DJ at a famous nightclub in Seoul when he was 19.

“My goal as a DJ was to always ensure that the customer had the best night out possible while I was in charge of the music. I practiced and practiced, studied and experimented with different songs and playlists,” said Kim. “Most importantly, I collected lots and lots of LP records, which eventually became my treasures.”

Kim made a name for himself as a DJ by launching remix albums that featured only the best hit singles of the moment, carefully selected and arranged by Kim himself. Kim left the nightclub scene in 2001 after being scouted by Rock Record, a Taiwan-based record company under which he produced popular singles for talented Korean groups such as As One in 1999 and Rumble Fish in 2004.

In the early 2000s, Kim was thinking about doing something else with his vast musical background. He started by buying a small space in Hannam-dong where he and his friends could drink and listen to his thousands of dusty old LPs acquired over the previous decades.

Within months, more and more people began flocking to the place, wanting to join in the nostalgic mood. Kim eventually decided to make the venue an official business.

Thus, in December 2005, the first Bamsa opened its doors to customers, with the goal of becoming a “comfortable place where people could enjoy quality music and have fun at the same time,” said Kim. After the second Bamsa was launched in Hongdae the following year, business really began to take off.

“I think the success of Bamsa can be accredited to its special atmosphere,” Kim said. “People come to Bamsa because they feel stressed and lonely in a fast-paced world. Here, the music speaks to you and understands you better than any friend. With some alcohol and friendly company with similar musical tastes, people feel liberated.”

“Just five, six years ago, South Korean mainstream media did not pay attention to ’70s-’80s music. But nowadays, music from that era is leading the trends in the mass media, including television, radio and music programs, as old singers are returning with new albums and young singers are singing covers of old songs,” explained Kim.

“Younger people are initially drawn to such ‘new’ music by virtue of exposure. And once hooked, they actively tag along in this great revival of the past,” he added. Bamsa’s Gangnam branch, especially, sees many visitors in their mid- to late 20s, according to Kim.

Although Bamsa is a place where diverse age groups mingle freely, it only admits those born before 1991 ― a gesture made by Kim in consideration of the older customers who were the original Bamsa-goers.

Still, Kim believes that Bamsa is one of the few places in Seoul where odd combinations of people of different backgrounds and ages bond easily and have a good time. “It’s simple: Sing along, be nostalgic, hang out, drink away and feel happy.”