[ The Korea Herald – Send E-mail ]
[Weekender] Analog-faced high-tech gadgets lure buyers
By Korea Herald
Published : Mar 7, 2014 - 20:32
Updated : Mar 7, 2014 - 20:33
From digital cameras that feature designs from the 1970s to television sets with dials, a growing number of electronics brands are exploiting the nostalgic yearning for the past to attract people who miss the analog days.

Ham Sun-hae is one of those consumers who find retro-inspired appliances a great fit for her home. “Even though I already have a television at home, I want another vintage-looking television set for decoration,” said Ham, a 35-year-old office worker. “I like the warm and cozy feeling that the vintage goods have.”

Thanks partly to the popularity of TV drama series “Answer Me 1994” and movie “Architecture 101,” the retro boom made an impact on the sales of home appliances and IT gadgets that have emotional links with consumers. 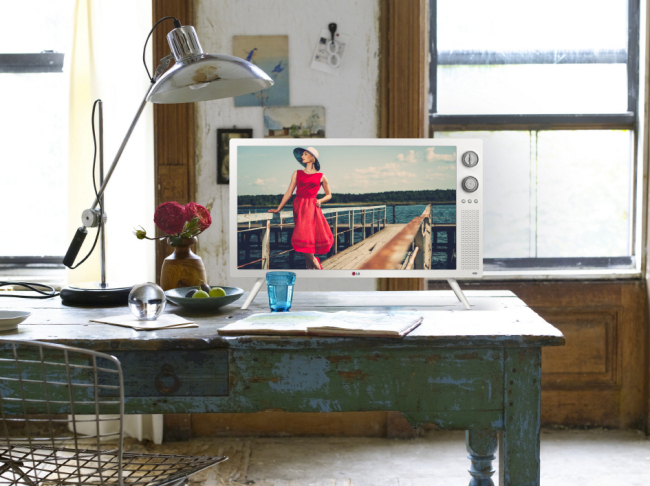 LG Electronics’ Classic TV
“People seek out the warmth, simplicity and laid-backness they used to have in the analog days,” said Yang Yoon, a psychology professor at Ewha Womans University.

“But at the same time customers, don’t want to lose the convenient features that high-end products provide,” Yang said. “So the retro products are modern rebirths of old products, not products from the past.”

Last year, LG Electronics introduced a 32-inch LCD set reminiscent of the ’70s Braun tube TV, fitted with channel and volume dials and a wooden frame. The inner workings are far from retro. The company kept the TV’s functionality modern with a 1080p IPS display, and USB and MHL inputs.

The marriage between old and new, however, is more complex than it may seem.

“The most challenging part of designing the TV was delivering the analog feeling while providing the same up-to-date tech features that other current televisions have,” said Steven Kim, designer of the Classic TV and chief research engineer at LG Electronics’ HE Design Lab. “Enabling users to control more than 600 channels with a rotary dial was a daunting task, too.”

The retro trend in the IT and home appliances industries shows that consumers, who are tired of seeing the same futuristic-looking products, tend to seek distinctive designs adopted from the old days.

“As the electric appliance market has been entering a mature stage, more consumers want hard-to-find goods. The vintage designs meet their desire,” an industry watcher said.

The camera industry is a sector that is most actively working to bring the customers back to the old days with their vintage-looking products.

Japanese camera maker Olympus unveiled the Olympus E-P5, borrowing from the styling of its film camera from the ’60s.

The 2014 iF Design Award-winning camera was popular with Korean consumers for reviving the joy of analog design and handling. Other camera manufacturers including Fujifilm, Sony and Panasonic are also cashing in on nostalgia with retro-style series.

Despite its price tag of some 4 million won, seven to eight times more expensive than the same storage capacity fridges by Samsung and LG, Korean customers are willing to wait about two months to get an SMEG fridge delivered to their kitchen.

Industry watchers attribute the popularity of SMEG’s premium product to its unique design.