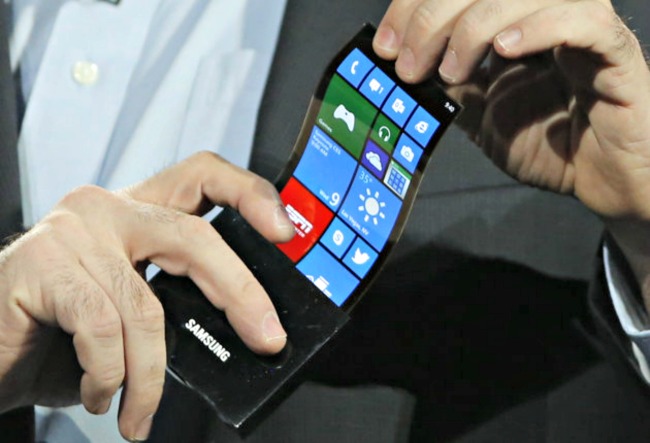 A U.S. businessman showcases Samsung Electronics’ flexible OLED display YOUM during the CES 2013 in Las Vegas. (AP)
Samsung Display and LG Display are poised to embark on mass production of organic light-emitting diodes for flexible displays for smartphones in October, according to industry sources on Sunday.

Samsung Display is reported to use a 5.5-generation (1300x1500mm) line at the OLED plant in Asan, South Chungcheong Province, and LG Display is to operate a 4.5-generation (730x920mm) line in Paju, Gyeonggi Province.

“Within this year, Samsung and LG will have a monthly production capacity of 1.5 million and 35,000 flexible panels, respectively,” a source said.

On expectations that flexible displays will be put into mass production, the sales outlook of related companies improved.

“The flexible display segment is expected to generate momentum in the display sector,” said analyst Lee Deuk-ho of the securities firm.

Samsung and LG’s new smartphones, which will reportedly be unveiled next month, are said to be plastic-based, light and unbreakable. Since the technology is still in its nascent stage, users will not be able to change the shape.

“The newly launched curved phones will not be completely flexible,” Samsung SDI’s CEO Park Sang-jin said last Wednesday. However, he added, “We have developed the technology to make batteries a little curved and to fix them after being curved.”

It will take a few more years for flexible displays to be able to fully take different forms and to be rolled up like paper, a source said.

The global flexible display market is expected to jump from $21.9 million in value this year to $94.8 million in 2014 and to $11.7 billion in 2020, according to Colorado-based market research firm IHS.