The family of an American teacher with a rare brain disease is working to take him home so that he can continue treatment.

Sean Jones, an assistant teacher based in Gyeonggi Province, was hospitalized in May with encephalitis NMDA, an auto-immune disease that attacks the brain.

But treatment has been stopped and, although the U.S. Embassy had arranged for a doctor to fly with him on Sept. 4 to Indianapolis, Indiana, where he will be entitled to state support for his medical care, the hospital will not transfer him until its bill of around $40,000 is paid. 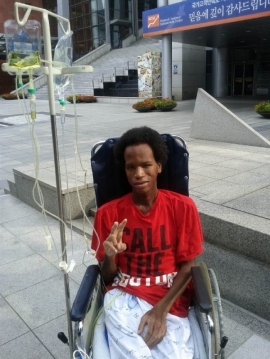 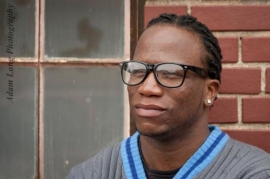 LaTanya Dodd, Jones’ mother, who has been in Korea caring for Jones since July 2, said that through donations, use of savings and selling things, they had raised about three-quarters of that sum.

“I really don’t know if they can legally hold him here. If they can’t legally do so he will be going,” said Dodd. “They won’t care for him anymore, and that’s what I’m worried about: Is that going to affect the whole outcome, just sitting here waiting?”

Dodd was also frustrated by the hospital’s lack of personal care. She was surprised to find that they would not give basic care such as cleaning and feeding and could not understand why nurses were providing it for other patients but not Jones.

She said that he now has bed sores, which made transferring him to the United States more complicated.

“For five days he laid in bed and was not touched. That’s how he developed the bed sores,” said Dodd.

“I was told before I got here the reason was that they were scared because he was violent. He was having violent outbursts (because of the disease). He was very difficult for me, too, when I got here, but they expect me to do it alone.”

Jones’ disease is extremely rare ― it was first properly identified in 2007 ― and getting treatment was difficult as it was initially mistaken for a mental illness.

In the early stage of the disease, Jones suffered headaches and hallucinations, and friends had noticed personality changes. After CT scans failed to find any problems, doctors prescribed antidepressants and told Jones to rest.

But there was no improvement, and two days later he was admitted with suspected viral meningitis and a fever of 108 degrees Fahrenheit. It was only after Jones failed to respond to treatment and two spinal taps that a final diagnosis was reached.

His digestive system has also been badly affected. At 1.75 meters tall, Jones weighed 85 kilograms in May but dropped to just 40 kilograms at one point.

Dodd said his physical condition was improving, with his weight now about 46 kilograms, but that it was a struggle.

“He is past the nausea part, but nothing tastes to him how it’s supposed to taste,” she said. “So he’ll take a bite and he won’t eat it.”

But Dodd was concerned for his mental well-being. Jones was involved in b-boying here and worked as a Christian missionary in Costa Rica and was planning to pursue a master’s in education.

“He loves children, and that’s why he became a teacher. He taught homeless children in Chicago. That’s how he has been ever since he was a little boy,” said Dodd. “He met everybody, talked to everybody. He’s just an outgoing, friendly person.

“That’s the saddest part for me. His personality is different now. The disease has changed his personality a lot, but I’m hoping that it will come back in time.”

She said this might be partly because he finds it difficult to understand his situation when it is explained to him.

“I mean it’s scary, you wake up and three months of your life is gone. He doesn’t really understand what happened, why it happened, because he was doing everything he was supposed to do (to stay healthy).”

Donations are being accepted via a campaign on www.giveforward.com titled “Bring Sean Home” and through direct transfer to his Kookmin Bank account, 598001-01-255172.