President vows to get to the bottom of the case and cooperate with U.S. authorities

President Park Geun-hye on Monday apologized to the public over the groping scandal involving her former spokesman Yoon Chang-jung, as the controversy continued to spill over to her office and undermine political momentum that she had hoped to pick up upon her first overseas tour.

“I regret that an unsavory incident involving a public servant occurred toward the end of the U.S. visit, thereby causing great disappointment to the people,” Park said during a weekly meeting with senior secretaries.

It was Park’s first mention of the incident involving Yoon, who allegedly groped an intern hired to help the Korean delegation accompanying Park in her visit to Washington last week.

The scandal rocked the nation, eclipsing Park’s first summit talks with U.S. President Barack Obama in what observers called an “unprecedented and international humiliation,” and pulled back the new government’s administrative drive for creative economy and security initiative.

Park also offered an apology to the alleged victim, her family and the Korean residents in the United States for having caused such a “huge pain.”

The president’s apology came three days after she returned from the six-day visit to the U.S., which was initially aimed to highlight Seoul’s reinforced alliance with Washington and robust investment environment of Korea.

The apology, the first of its kind from the president since she took office in February, came after others by her chief of staff Huh Tae-yeol on Sunday, and senior secretary for public affairs Lee Nam-ki on Friday ― to little avail at quelling the public angst.

Park pledged that every doubt and question will be clarified about the scandal and that the government will cooperate actively with the U.S. investigation into the allegations surrounding Yoon. 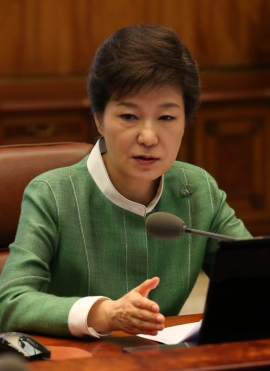 Park, however, did not specify whether she has accepted the resignation reportedly submitted by Lee Nam-ki upon their return from the U.S. visit. Lee was absent from the Cheong Wa Dae meeting.

Yoon is accused of groping the Korean American in Washington on Tuesday night, local time. Yoon has denied it along with other reported allegations of him making unwanted sexual advances, although reports suggested he had already admitted to several accusations in preliminary questioning by Cheong Wa Dae’s civil affairs department upon his return.

Cheong Wa Dae officials said they plan to request the U.S. authorities to speed up the investigation.

Park said discipline among the presidential secretariat and Cheong Wa Dae should be set right and that it should be an opportunity to reflect upon themselves.

As part of such measures, presidential spokeswoman Kim Haing told reporters that Huh echoed the president’s call for fortified discipline among the officials at the meeting of senior secretaries later in the day.

Huh ordered the office of civil affairs to review the entire schedule of the president’s latest visit and create a manual for the delegation to uphold on future overseas trips, according to Kim.

“Not only regarding this incident, but also in the future, any inappropriate action or statement by Cheong Wa Dae officials regardless of one’s position will be dealt with ‘zero tolerance,’” Huh said in a letter addressed to all employees read out at the meeting.

Despite Cheong Wa Dae’s stepped-up move to contain the scandal from spreading further, the opposition parties lambasted Cheong Wa Dae’s measures for being belated and unsatisfactory.

“It is questionable whether the people will accept (Park’s) apology as being sincere. As the fundamental cause of this crisis lies upon the president for having gone ahead with the personnel appointment that had been opposed by so many, she should have apologized for her error first,” said main opposition Democratic Untied Party’s senior spokesman Kim Kwan-young. He also pointed to a lack of plans to review and reinforce Cheong Wa Dae’s crisis management system.

Upon the burgeoning scandal, Cheong Wa Dae was lambasted for failing to clarify its line of actions leading to Yoon’s departure from the U.S., or for reporting the case to the president 26 hours after the fact.

The tug-of-war between Yoon and Lee over who made the decision for Yoon to return to Seoul without completing the U.S. trip further tainted the presidential office’s image.

Yoon had been Park’s spokesman since her transition committee days, although his consecutive appointments were sharply protested by the opposition for his rightist-wing views and blunt incommunicativeness.