Choco Pie has been a legendary snack for nearly 40 years since Orion created it in 1974.

The two small, round chocolate-covered layers of cake packed with marshmallow filling melted the hearts of people around the world including North Koreans after they spread in the isolated country through the inter-Korean industrial park in Gaeseong.

Just four years after its launch, Orion Choco Pie met a copycat rival at home. Lotte Confectionery introduced the same snack with the same name in 1978.

Orion filed for a patent trial when Lotte registered the identically pronounced trademark using one different Korean vowel for the copycat product in 1979.

Orion lost, however, as the court acknowledged Lotte’s trademark rights. 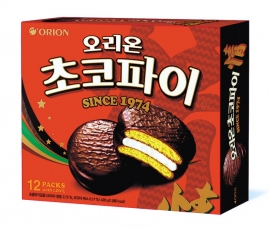 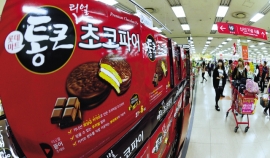 In the 1980s, Orion filed another lawsuit accusing Lotte of copying its package design, but the two eventually made up in court.

Years after Orion changed its package color from blue to red as red appealed more in China, Lotte followed suit in 2012.

Despite the constant copycat acts, Orion’s Choco Pie commanded over 80 percent of the domestic market with its uniquely soft and moist, chewy texture.

But the original is now facing fresh challenge as Lotte Mart earlier this month rolled out its own private label product “Tongkeun Choco Pie,” which contains more chocolate and is cheaper.

A 7,200-won box with the Lotte Mart label contains 33 choco pies, six more than Orion’s box at the same price.

In the six days after it hit stores on May 1, the retailer’s private label product sold 2.6 times more than the original by Orion in 103 Lotte Marts nationwide.

Korea’s retail mammoths Lotte Mart and Shinsegae E-mart have been chided for releasing dozens of private label products at cheaper prices compared to competitors using their dominant positions in retail.

The discount chain also sells its own Lotte Ramyeon and Choice L Brownie Mix at lower prices compared to the bestselling Shin Ramyeon of Nongshim and Q1 Brownie Mix of Samyang, respectively.

Suppliers are perplexed at the retail giants’ private label products that are up to 50 percent cheaper than rivals.

They do not dare complain, however, since they can’t afford losing E-mart or Lotte Mart as their main sales channels.

The small- and medium-sized companies that manufacture the private label products for E-mart or Lotte-Mart are the biggest victims as they are pressured to keep prices low.

While general food producers pushed up their product prices by an average of 12 percent per year citing rising raw material prices, the SMEs that manufacture private label products raised them less than 1 percent.

Because of the pressure to keep prices low, these SMEs complain they can’t make better products than large food companies and have no choice but to keep making private label goods for retailers rather than developing their own brands.

As the economic slump deepened, sales of private label products jumped from slightly over 2 trillion won six years ago to over 7 trillion won last year.