[ The Korea Herald – Send E-mail ]
Film inspired by true story lacks sensitivity for real-life victim
Why sex crime scenes in ‘Norigae’ are problematic
By Claire Lee
Published : Apr 23, 2013 - 19:47
Updated : Apr 30, 2013 - 11:09
As director Alfred Hitchcock once said, the act of watching others for voyeuristic pleasure is a “basic human trait.” In the end, the cinematic experience, sitting in the dark hidden and distanced from the events on the screen, is a form of voyeurism. Movie spectatorship is, in late French film theorist Christian Metz’s words, “inherently antisocial”: It offers us the pleasure of looking ― from romance to murder to horror ― knowing the scenes we see cannot look back at us.

Director Choi Seung-ho’s recently released movie “Norigae” (Plaything) is the kind of movie that should have been conscious of the voyeuristic and scopophilic quality of movie spectatorship. The film is seen widely as based on the case of actress Jang Ja-yeon, who killed herself in 2009 leaving a seven-page handwritten note claiming she had been sexually abused by high-profile media executives. And if it is our “basic human trait” to feel such pleasure in looking, and it is unavoidable by nature once we are in our theater seats, some scenes should be kept in the dark ― not marketed for public entertainment. 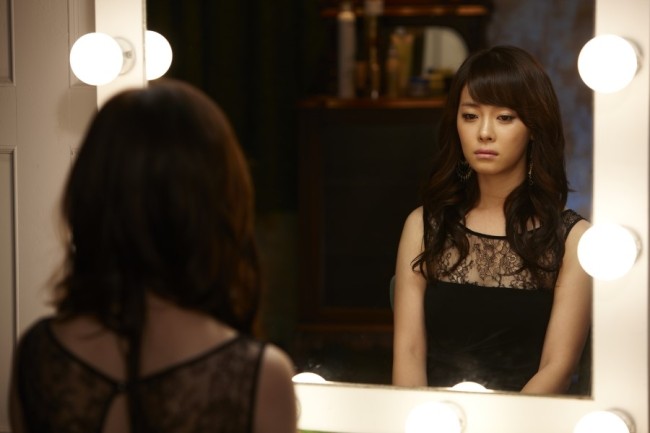 Actress Min Ji-hyun stars as an abused actress in director Choi Seung-ho’s “Norigae.” (Joy n Contents Group)
The movie begins with a statement saying that “this film does not have any relevance to any real-life event or an individual.” But the film and its protagonist ― regardless of what director Choi’s intentions were ― inevitably and constantly remind of the late Jang and her case.

It follows the tragic life of Ji-hee (played by Min Ji-hyun), an up-and-coming actress, who commits suicide after being forced by her boss to have sex with filmmakers and the owner of a major newspaper. At a recent press conference, director Choi said he chose to include the sex-crime scenes to reveal the cruelty of the offenders. Yet, the multiple nude scenes where Ji-hee is abused ― including the one where she endures bondage-discipline-sadomasochism in tears ― are overly graphic and visually stylized.

What we know is Jang wanted the offenders to be punished ― which did not quite happen in real-life ― but we certainly don’t know if this was what she ever wanted: having people watch an actress playing her being sexually abused and naked on screen. The scenes, whether or not they are accurate representations of what actually occurred, are insensitive to the late victim’s sufferings, and disrespectful to her short-lived life.

We pay to go to theaters and watch people die and suffer in movies. We get entertained by war movies and their violence, as well as disaster flicks. “Norigae,” however, should have been more selective with its scenes. It’s hard to imagine any victim wanting the sex-crime scene to be graphically reconstructed in a commercial film, which inevitably serves as a form of visual entertainment.

Some things should be kept private and unseen, in spite of and because of our basic human trait.