The rise of expat hip-hop

This is the first in a two-part series on the build-up of the expat hip-hop scene in Korea. ― Ed.


Any expat with a Facebook account knows that on any given weekend there are a number of live expat hip-hop events going on in Itaewon and Hongdae.

What many might not know is that just about four years ago, the vibrant scene was virtually non-existent, outside of a couple open mics and a few random artists and DJs such as Pinnacle TheHustler and Black Ilumin. During a time when the likes of hip-hop acts Epik High and Drunken Tiger were popular in the Korean mainstream, there was almost nothing in terms of foreign hip-hop in Korea.

And the same challenges seemed to plague every artist ― a lack of venues and gigs.

No one seems to agree on exactly when or how expat hip-hop started. For ICONZ Media LLC CEO JC, who came to Korea in 2005, his first involvement with the scene started around the end of 2007 and early 2008.

“I noticed there wasn’t much hip-hop as far as emceeing, turntablism, beatboxing, graffiti,” he said. “So I started to check out venues to see if there was anything out there. There was an open mic hip-hop night with only two emcees.”

The two were Sonny of Sonny Side Films and James Heshberger, also known as the Dirty Rooster, who had formed their own hip-hop group, Smooth Villainy, which performed in Hongdae and Bucheon, Gyeonngi Province. Once JC found the open mic, he started gathering other hip-hop artists and bringing them to perform, many from the military.

From there, JC officially started his company, ICONZ, in 2009. It started out as five guys who wanted to do innovative things related to media and entertainment. They started with setting up hip-hop events around Seoul, he said.

“It got better between 2009-2011, with a hip-hop night at Hongdae TA club, the Back to Basics series and some other hip-hop events organized by my company, but it started fading away again around the beginning of 2011,” he said. “Some of the artists were military so they had to change duty stations, but this year we are slowly bringing it back with shows like CLASH, Seoul Streetz and new guys like Iron Mic.” 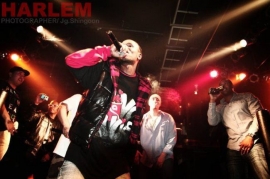 Hip-hop artist BNews, who opened for Yung Joc and Flo-Rida when they came to Korea, performs at an event with other expat artists, including DA Green (center, at rear). (BNews)

And while ICONZ was busy setting up shows and gathering individual artists, other acts such as improv hip-hop group Space Rhyme Continuum ― with Hershberger, Benny Fax and Pestalance ― and artist Pinnacle TheHustler were building fan bases. Sonny handed over the open mic to ICONZ and moved into making films through Sonny Side Films.

When he started Smooth Villainy with Sonny, Hershberger said it seemed it was just his group and Pinnacle doing shows, but the scene was pretty good, with artists “coming out of the woodwork” once he moved on to Space Rhyme Continuum in 2009.

“It was very supportive,” he said. “It was cool. There were a lot of people from different places.”

“We had to remind each other that things would be all right. It was a ‘Finding Nemo’ moment. Just keep swimming,” he said.

The group was a big hit, and they were taken aback by the support and encouragement from their fans, especially since when they started they had to beg for gigs.

According to artist Pinnacle TheHustler, the crowd was “really, really thirsty” for a hip-hop scene. The artist, who originally came to Korea to teach English, started out performing for Korean crowds about his second month in with former Korean group Uptown member Carlos Galvan. He got his first taste of the expat music scene when he formed his own band and won a battle of the bands in Apgujeong during his first year in 2008.

He said he can still remember meeting some of the current expat favorites like DA Green, Lyric, JoshRoy and Black Ilumin, who is signed to a Korean label.

“There was a little bit of competition. Not competition where it’s anything to break up the community. It’s more like competition to build it up.”

About the same time expat hip-hop was burgeoning in Seoul, scenes were starting up in other cities in Korea.

In Gwangju in late 2009, Megook Movement ― made up of DJ Hypnotiq, AC Cutta and B.Jinx at the time ― was just getting its start.

According to the group, it all started one night at a foreigner bar call Speakeasy. DJ Hypnotiq was DJing to a packed house when B.Jinx approached him about starting a group. That same night, the third member, AC Cutta, also approached DJ Hypnotiq about freestyling at the party. After a rousing freestyle to Lil Wayne’s “A Milli,” DJ Hypnotic decided they had the talent to start a hip-hop group and Megook Movement was born.

“South Jeolla Province wasn’t represented when it came to the expat hip-hop music scene in Korea,” said DJ Hypnotic. “We are also huge fans of hip-hop and since there is a lack of that, we decided to make our own music, make our own shows, and try and start a bit of a scene for it in Gwangju and other cities around Korea.”

The group started out for fun, drinking and freestyling at Hypnotiq’s apartment. Once the group had three to four tracks, they began performing whenever Hypnotiq or B.Jinx had DJ gigs.

“We really had no idea things would go as far as they have in the past few years,” they said.

They began traveling to other cities for gigs and picked up new members Worth Green, Philanomics, $tik Figure and De Trong. Over the years, the group said it has grown in quality and built a strong fan base.

Megook Movement said some of their biggest challenges throughout the years were dealing with skeptical venue owners, who had never hosted a hip-hop event before, and finding time outside of work to make music.

The group went on to fulfill their dream of performing at Mudfest this year and said they are keeping true to their original goal ― to spread hip-hop culture and make Megook Movement the No. 1 expat hip-hop group in Korea.

But that’s only the start of accomplishments by expat hip-hop artists, which helped shape the expat hip-hop scene into what it is today.