“I’d like to see local English-language studies scholars whose research interests differ from one another collaborate and eventually bring positive and creative works to the scene. I’d like to make more opportunities for them to learn more about one another.” 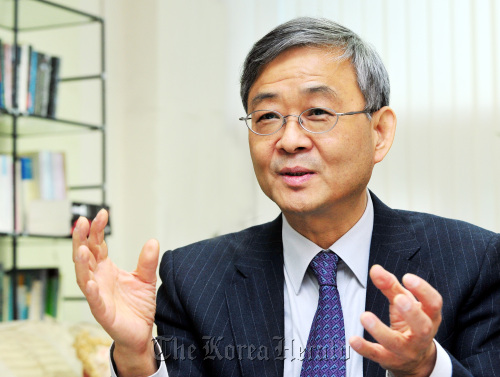 Kim Young-min, president of English Language & Literature Association of Korea, speaks during an interview with The Korea Herald at his Dongguk University office in Seoul on Thursday. (Park Hyun-koo/The Korea herald)
Founded in 1954, ELLAK is an academic organization consisting of some 2,000 scholars of English in Korea. Kim, who currently teaches at Dongguk University in Seoul, has served as the president of Yeats Society of Korea from 2000-2002, and the president of Lacan and Contemporary Psychoanalysis of Korea from 2008 to 2010. In 1998, he taught Korean poetry at Cornell University in the U.S.

“It was at Cornell that I realized I’m a Korean, after all,” he said. “Though my academic major was English literature, people would ask me more about Korean literature and culture.”

He also realized that to teach Korean culture and literature overseas, one needs to speak good English to deliver the right information. Among many other things, promoting Korea and its culture requires exceptional English speakers, and that’s one of the reasons why he agrees with launching of more English-immersion courses in local universities’ English literature or language programs.

“I know the issue of English immersion courses would bring questions like, ‘Are we living in Korea or in the U.S. or the U.K.?’“ he said. “But if we really want to be globalized, my answer is, “Why not go for it at least among the English-language studies circle?’”

Having studied Jacques Lacan, a renowned French psychoanalyst and psychoanalysis as well, Kim said English literature is ideal for collaborative research with scholars of completely different research interests as well.

“For example, in order to explain the high suicide rate in Korea, or depression among housewives, I think medical doctors, psychoanalysts, and scholars who teach contemporary English literature could do a great job together,” he said. “English literature isn’t just about the English language. It consists of philosophy, ethics, morals, values and all in all, what it means to be a human. English literature has also been the key source for literary criticism, reviews and theories. It’s a great source for us to understanding who we are and what our problems are.”

Having close relationships with many foreign ambassadors and diplomats in Korea, Kim said he’d like to organize more sessions on English literature overseas, even in countries where English isn’t their first language. He’s also planning to invite more foreign scholars and students to Seoul so more professors and students will gain an opportunity to network.

Kim, who was appointed president of ELLAK in January, serves a one-year term. For more information on ELLAK, visit www.ellak.or.kr.