Finding a pair of socks on a mountainside might not only keep a North Korean person warm this winter, explained Cessilia Bosung Park.

The socks ballooned by well wishers in the South could be traded for a month’s supply of food on the black market, the North Korea Peace organizer said.

That is why she and more than 40 other international volunteers used five giant helium balloons to launch 2,000 socks from near the North Korean border on Saturday.

The new group, North Korea Peace, is sending boxes tied to the helium-filled plastic tunnels, used in greenhouses, northward from a car park in Paju once a month. And this month, well-wishers from 12 different countries showed up.

Their aim? To remind people living in hunger and poverty under the Kim regime that others in the world are thinking of them.

The old fruit boxes carrying the socks and messages of hope are held shut with strings tied to special timers set to release the cargo 3 hours after take-off. With a favorable wind, by that time they should have made it to North Korea. 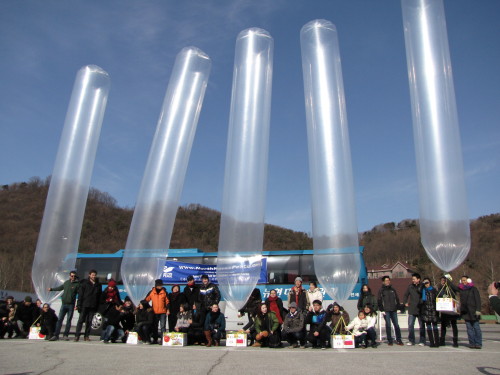 Volunteers prepare to launch helium balloons to carry socks to North Korea from Paju on Saturday. (Kirsty Taylor/The Korea Herald)
North Korean defector Lee Ju-seong has been writing the well-wishes on plastic sheets so they can be read if found by people in the North Korean countryside months later.

Whatever the message, the group keeps it non-political and non-religious for fear of repercussions for any North Korean caught with something from the South on them.

However, as well as the material benefit of receiving the socks, group organizers hope to draw international attention to the plight of ordinary people in North Korea, and to encourage the restarting of international aid from countries such as South Korea and the U.S.

“We want to make a statement to the world to address the situation of North Korea and the need for aid,” Cessilia said.

“I could not grasp that while I was living in South Korea only two hours away maybe 3.5 million people have died in North Korea in just five years, and they are saying that the same thing is going to happen again.” She said, adding that the South Korean and U.S. governments’ suspension of aid put North Korean people at risk.

Some governments have halted aid to the North until Pyongyang apologizes properly for the sinking of the Cheonan South Korean navy vessel, and on suspicion that food aid is not reaching the right people, but being used to feed the army.

“This is the only certain way that aid reaches the people ― through balloons,” said Cessilia, who was born in South Korea but has also lived in the U.S.

North Korea Peace has people raising money and sending socks from the U.S., but finding the $3,000 needed to fund each drop is a challenge. But the group has been attracting volunteers and interest from international media including Reuters and AP.

One new volunteer Jeanine Campbell, who moved from Canada to teach English in Chuncheon four months ago, explained why she wanted to help.

“Just hearing different things about the famine in North Korea really piqued my interest,” she said. “I am concerned about the way the U.S. is responding to sending food aid. I would like to provoke some interest and awareness about what’s going on there.”

Those interested in helping more can make a donation, send socks, attend the group’s Friday meetings in Itaewon, or come to the balloon launches on the last Friday of each month. For more information email northkoreapeace@gmail.com or go to www.northkoreapeace.org.