The Ministry of Culture, Sports and Tourism will push Korean traditional culture as the new driving force for “hallyu,”or Korean Wave.

The Culture Ministry announced on Monday plans to further promote Korean traditional culture and also inaugurated the K-Culture Promotion Taskforce which will coordinate the plans.

“K-drama started hallyu in 1995 and K-pop has been continuing its popularity since the mid-2000s. The recognition of Korean traditional culture, literature or other related sectors, however, is low. It is time to diversify the trend and make it sustainable,” said Culture Minister Choe Kwang-shik.

Korea ranked 35th in the traditional culture category of the national brand index reported by the Presidential Council on Nation Branding in 2010, said Choe, and the goal is to boost the ranking 20th place by 2015.

It will spend 33.5 billion won this year toward the goal and prepare the expected budget of 230 billion won for 2014 and 2015 in cooperation with other governmental organizations. 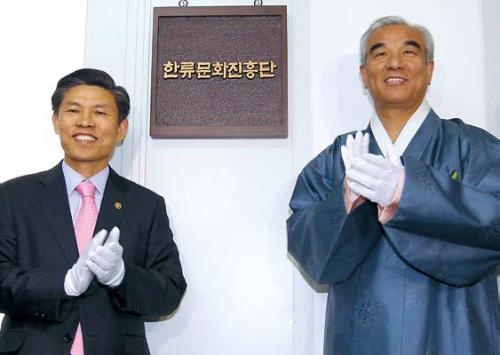 Mid and long-term plans which will be carried out from 2013 include creating Han Culture City in Sejong City, which will become a model city that offers a complete Korean traditional culture experience, including lodging and education; selecting 10 representative traditional villages throughout the nation; training professionals who can cover both traditional and contemporary culture; developing Korea’s representative traditional festivals and must-see shows for foreigners; supporting Korean libraries in underdeveloped countries; dispatching 100 culture and university art majors overseas as cultural agents.

“Some may worry that the plan may end up being a onetime  event. There have been such plans, like Han-style. But while Han-style focused on separate genres of culture, this time we are seeking to harmonize them,” said Choe.

The Culture Ministry will set up legal grounds and create a pan-governmental council to prevent overlapping of projects and develop new ones, Choe added.

“The first goal is to have many Koreans recognize the importance of our traditional culture and form a consensus about its application in everyday life.”