[ The Korea Herald – Send E-mail ]
Vintage eyeglasses provide clear path to Hollywood
By Claire Lee
Published : Jan 27, 2012 - 19:40
Updated : Jan 27, 2012 - 19:40
Even in Hollywood, it’s rare for anyone to be able to boast a connection to dozens of Oscar-contending films and blockbusters over the last 25 years. But Russ Campbell can hardly turn on the television or go to a movie theater without seeing something he’s made a mark on ― including the high-profile films “J. Edgar,” “Tinker Tailor Soldier Spy,” “The Rum Diary,” “Cowboys & Aliens,” “A Single Man,” “Catch Me if You Can” and “The Curious Case of Benjamin Button,” as well as such TV shows as “Mad Men.”

Campbell isn’t a big-shot producer or a studio honcho. He’s the owner of Old Focals, a vintage eyewear store in Pasadena that over the last two decades has supplied glasses for movies, television and commercial productions.

When he was young Campbell, who is dyslexic and a college dropout, had a habit of setting his alarm clock at 2 a.m. to write down his dreams and ideas. One night when he was 20, he said, he dreamed about an old man wearing a pair of sunglasses. Campbell complimented him on his glasses, to which the old man responded, “Oh, you like these old focals? Here, you can have ‘em.”

Though he had no experience with eyewear and didn’t wear glasses himself, Campbell decided to buy boxes of old spectacles from optical stores and garage sales and learn how to refurbish them. He paid a lab to cut sunglass lenses for $3 a pair, brought the glasses back to their original luster and started selling them to stores.

Then Hollywood prop master Brad Einhorn saw Campbell’s glasses at an American Rag store and tracked him down. Before Campbell knew it, he was providing glasses for his first film, “Tucker: The Man and His Dream” (nominated for three Oscars in 1989).

“From that point on, it was just straight to the top. Word got around and I was then immediately thrown into the filmmaking world,” said Campbell, 48, who refers to himself as a man “who doesn’t work but is always working.” 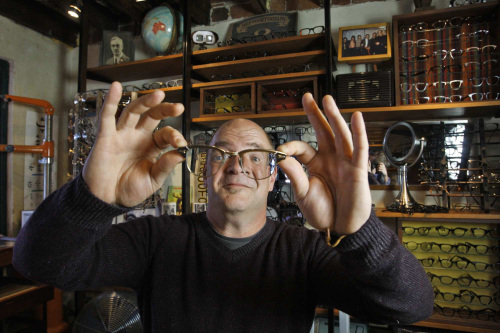 Russ Campbell, owner of Old Focals, is photographed with vintage glasses in his Pasadena, California store, January 6, 2012. His vintage eyeglass company provides frames for movies and television shows. (Gary Friedman/Los Angeles Times/MCTeye)
Twenty-five years ago Campbell opened his warehouse, where he stores hundreds of thousands of eyeglasses, remembering every pair and exactly where each is located. Thirteen years later, Campbell founded the Old Focals store on West Green Street in Pasadena for customers who wanted to buy glasses for personal use. The warehouse remains the hub for the glasses he provides the industry.

Campbell, who has three employees, said about 60 percent of his business is derived from Hollywood sales, with the remaining 40 percent coming from retail. He estimates Old Focals’ sales for 2011 at about $1 million, which he projects will increase to $1.2 million in 2012.

To fit the glasses to a particular role, Campbell needs to get to know the character.

“When it comes to film, we rattle off a bunch of questions, like ‘Where do they live?’ ‘What part of the country?’ ‘What year?’ ‘What was their income like?’” he explained. “And then we are able to put together a selection and say, ‘OK, he would be wearing these kinds of glasses, in this era, living in this area, in this particular demographic.’”

Campbell said finding the ideal pair of glasses for a character is often a committee decision, involving “the director, the actor, the costume designer and the prop master.”

Prop master Tim Wiles, who first turned to Campbell in 1999 while he was working on the Oscar-nominated film “Magnolia,” explained why he remains a loyal customer.

“He bends over backward to make sure I have exactly what I need and have the right frames and lenses for the actors. Whether it’s a pair of Louis Vuitton glasses or a pair of 1950s USA frames, he’s been able to meet whatever our needs are.”

Upcoming films with glasses provided by Campbell include Whitney Houston’s “Sparkle” and “Men in Black 3.”

Campbell’s quest for old focals takes him far afield. “I go around the world ― I’ll go to London and I’ll find glasses from World War I and World War II, where the glasses hold a prosthetic ― if someone lost an eye or if someone lost half of their nose or their entire nose or an ear,” he said. “They’re awesome.”

Campbell himself now wears glasses, a combination of three frames from the 1950s and 1960s that he says he “Frankensteined” together.

Although Campbell’s warehouse stock includes both refurbished and never-before-worn glasses, the pairs sold in his Old Focals shop are all unworn “deadstock” that was never sold by retailers. Most range from $79 to $200.

Many customers walk through the door and say they’re searching for a pair of glasses they saw being worn by an actor in character.

David Jasso, who has been working at Old Focals for four years, says “people often buy our glasses as a collectible object ― not just as a thing necessarily to wear. They have this thing now that represents the love that they had of this character, this actor, this film or of this period. Right now, vintage eyewear is the Levi’s of the ‘90s.”

Campbell is able to share his insights and passion for eyewear with many customers.

“Glasses are love ― it’s that close to your face,” he said. “Even if I don’t know the person, I am still able to pass judgment and say, ‘This is going to make you look your best’” ― Oscar nomination or not.