Korea’s Jeju Island was chosen as one of the New Seven Wonders of Nature through fair competition and there should not be any more doubts about the process, the chief of the Swiss-based organization told a Thursday press conference in Seoul.

Bernard Weber, chairman of the New7Wonders Foundation, convened a press gathering a day after arriving in Korea, vowing to resolve suspicions over the transparency of the voting that was conducted via the Internet and phone calls from July 2009 through Nov. 11 2011.

Weber “expressed deep regrets about some Korean media outlets which raised doubts based on limited evidence,” Park Dae-seok, an official at Korea’s National Committee for Jeju New7Wonders of Nature, said after attending the conference. Only a few reporters were able to attend the conference due to the short notice. 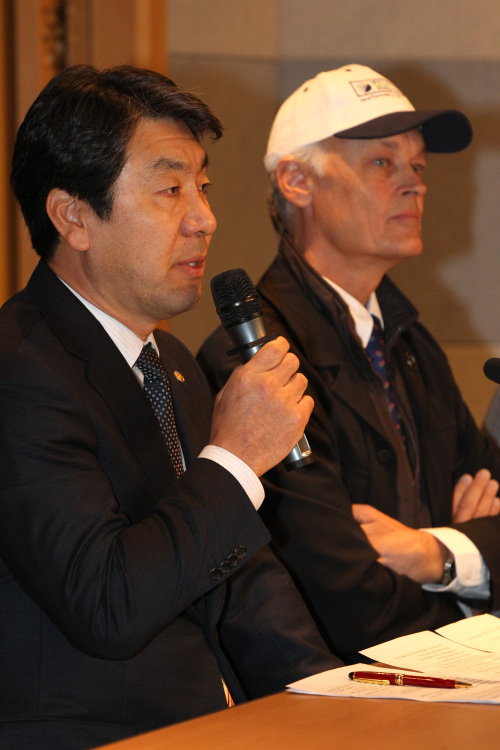 President of Jeju Tourism Organization Yang Young-keun (left) and chairman of the New7Wonders Foundation Bernard Weber speak during a press conference in Seoul, Thursday. (Yonhap News)
“The chairman made clear that his organization never asked countries for money or any other type of compensation in return for naming them the Seven Wonders,” Park said.

“The foundation does not reveal the ranking of candidates to give all New Seven Wonders equal status, not because it has something to conceal,” the official added.

Korea is Weber’s first stop in his trip around the New Seven Wonders of Nature countries, during which he will present authentication certificates and discuss schedule for the inauguration events. The chairman will be leaving Korea Friday.

Jeju beat 21 other candidates and became one of the New Seven Wonders of Nature along with the Amazon in Brazil, Halong Bay in Vietnam, Iguazu Falls in Argentina, Komodo National Park in Indonesia, Puerto Princesa Underground River in the Philippines and Table Mountain in South Africa.

Since the announcement was made, however, media outlets and activists here have been raising suspicions concerning the foundation’s identity, the money Jeju spent to be chosen and whether it was fair for government officials to take part in the voting multiple times.

Weber explained that his foundation rarely had officials at its headquarters as most officials were required to travel from country to country to inspect new candidates. He also emphasized that the New Seven Wonders campaign has a long, trustworthy history of 13 years.

The president of Jeju Tourism Organization, who also attended the conference, refuted criticism over the money that has been spent to have the island become one of the New Seven Wonders of Nature.

“With Jeju’s 500,000 people, it would have been impossible to have the island named the New Seven Wonders and it is only fair to allow multiple voting in this sense,” Park said, quoting JTO President Yang Young-keun.

While some 20 billion won ($18 million) was spent by Jeju officials and residents to vote via international phone calls, Jeju is expected to earn more than 4 trillion won in tourism profit this year, Yang had explained.

“With the tourism industry accounting for more than 80 percent of Jeju’s economy, 20 billion won does not seem like an unreasonably large amount of money,” Yang had added.

The foundation is currently taking votes for the New 7 Wonders Cities with the results expected later this year.