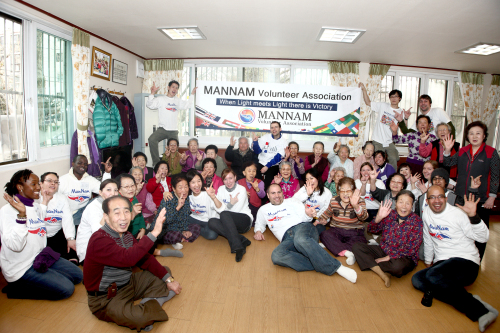 International volunteers enjoy time with residents at Daecheong Social Welfare Center in Gangnam, Seoul. (Mannam)
Volunteers are set to visit a center for people with mental disabilities on Jan. 28.

The Mannam volunteer organization is to visit House of Hope to help the center users, who are aged from about 7 to 30 years old. Twelve people are needed to carry out tasks such as cleaning the center’s dining room and kitchen as well as distributing food and washing dishes.

Mannam Volunteer Association also recently made a trip to Daecheong Social Welfare Center in Gangnam, where the organization’s singing club performed the traditional Korean song “Milyang Arirang.” In their individual native languages, the international volunteers expressed their wishes for the elders to stay healthy in the New Year. They did the traditional Korean bow, the “sae-bae,” to honor them during the Jan. 21 trip, which was recorded by KTV and will be broadcast at a later date.

“The elderly at Daecheong were greatly pleased with the performances of the expats who aimed to share light and love,” Korean-American Mannam volunteer Ham Eun-jou said. “The warmth and heart of the volunteers were well-expressed beyond the age, language, and cultural differences through their acts of service.”

This Saturday’s House of Hope trip will take place between 9:30 a.m. and 1 p.m. at the center located near Hwagok Subway Station’s Exit 4.

Those wishing to take part should e-mail their full name and phone number to mannamvolunteers@gmail.com with subject “HOUSE OF HOPE” before Jan. 28.