With the world’s attention continually shifting from one aspect of Korean culture to another, Korea should produce high-quality and consistent cultural products in the coming years by linking the old and new and the unique and universal, Culture Minister Choe Kwang-shik said.

“The first hallyu was led by Korean dramas and the second by K-pop. The third wave should consist of the Korean culture overall ― the content, the core,” the minister said in an interview with The Korea Herald last week.

“Traditional culture should become the basis of cultural products to make them uniquely Korean, yet global,” the minister, who majored in ancient Korean history, added. “Globalizing, popularizing and informatizing the Korean culture are the ministry’s main goals for 2012.”

Minister Choe took office in September 2011, as the popularity of Korean pop music was sweeping across Asia, Europe and Latin America.

The world-wide attention on K-pop presented Korea with new possibilities following the first example of hallyu in the early 2000s, when TV dramas, such as “Winter Sonata,” created fandoms across Asia.

The popularity of K-pop has sparked widespread interest in various aspects of Korean culture with the number of foreign tourists increasing sharply. 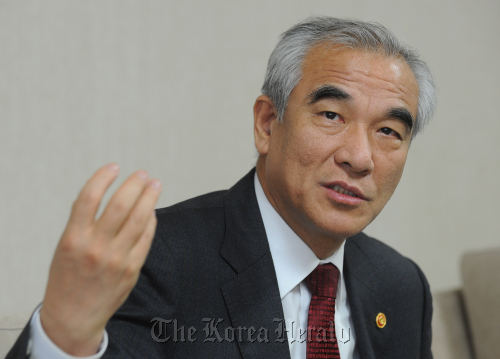 Culture Minister Choe Kwang-shik speaks to The Korea Herald in his office on Jan. 19. (Lee Sang-sub/The Korea Herald)
“It is important for the country to keep this wave going,” the 59-year-old minister said, adding that the “third hallyu” will be focused on lesser-promoted sectors such as art, literature, animation, film, food, clothes and more.

As a history scholar and former director of the National Museum of Korea, Choe is especially interested in ways of linking Korean traditional culture with content that can sell overseas.

He has seen potential in the recent TV drama “The Deep Rooted Tree” and movie “Arrow, the Ultimate Weapon,” the minister said.

The SBS primetime drama, based on the story of King Sejong, the creator of the Korean writing system Hangeul, enjoyed the highest viewership among its competitors, while “Arrow” was ranked No. 1 in audience figures last year with some 7.46 million viewers.

“What is strictly Korean is nowadays global,” said Choe. “We must focus on ways of globalizing the traditional content we have.”

Marking the 20th anniversary of Korea-China diplomatic ties this year, Korea expects some 3.4 million people from China to visit the country.

Chinese tourists have taken up the largest share of the Korean tourism sector over the past few years, largely due to the growing interest in Korean culture in China and the growth of that country’s economy.

Some 2.2 million Chinese came to Korea last year, spending up to 13 trillion won on high-end products including cosmetics, jewelry, designer-brand bags, watches and clothing, according to data by local market researcher Bain & Company.

To attract more travelers from China, Korea plans to strengthen promotion of the so-called “frequent individual travelers” among the younger Chinese generation, create luxury travel packages for the older and wealthier generation, and develop more accommodation, the minister said.

“We will also work on promoting tourist destinations outside Seoul with the 2012 Yeosu Expo coming up and all,” he said. “Regional areas also have more accommodation facilities compared to Seoul and the adjacent districts.”

The Culture Ministry also plans to increase support for artists and cultural programs for underprivileged households in 2012.

Under a recently announced plan, up to 1.71 million people will receive aid from the government for cultural activities and a foundation for artists’ welfare will be set up next year, as part of efforts to resolve the cultural divide among different social sectors.

Up to 1.6 million people in the underprivileged household bracket will receive the 50,000 won voucher this year, an increase from the 1.1 million who benefited from the policy last year.

“It is important to support both the suppliers and the consumers of culture to enhance the overall sector,” said Choe. “With the artist welfare law taking effect from Nov. 18 this year, we plan to make sufficient plans.”

Choe, who also oversees sports and tourism policies, said that the ministry aims to have Korea rank within the top 10 countries in the London Olympics with 10 gold medals. In the tourism sector, the government has set a target of attracting 11 million tourists.

Hallyu should not just be about spreading Korean culture to the world, the minister added.

“We Koreans must know about Korean culture well to make the wave. This is also an important part of hallyu,” he said.