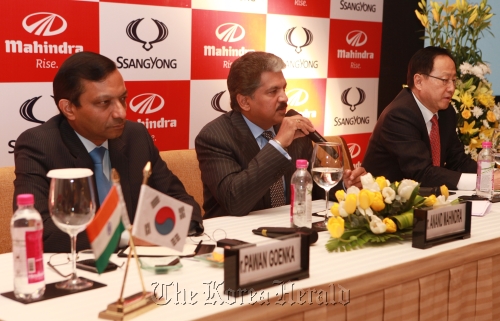 “We’re studying the business feasibility of launching XUV500 in Korea. Various components needs to be adjusted to meet local demands before we can make the decision to bring the vehicle to the Korean market, and we’re trying to see if the investment would be worth the potential revenue,” Pawan Goenka, president of the group’s auto and farm equipment sector, told reporters in Delhi for the 2012 New Delhi Auto Expo.

B. Bhaumik, vice president of product development, later confirmed that the company has sent two XUV500 models to Ssangyong last August to figure out the necessary adjustments needed for the Korean launch.

“Yes, we will take XUV500 to Korea. Because fully assembled and packaged in India would be less attractive to Korean consumers, we are looking for ways to manufacture the model locally in Korea,” Bhaumik told The Korea Herald. 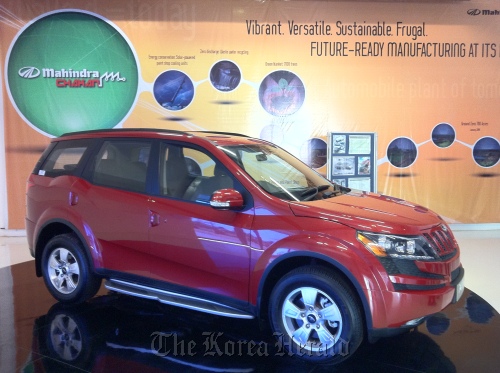 Mahindra’s XUV500 (Mahindra Group)
The new push comes under the plans for business synergy with its recently acquired affiliate Ssangyong Motor Co., Korea’s smallest carmaker it took over in November 2010. An ideal scenario for Mahindra is boosting Korean sales from India-made XUV500 and making Ssangyong’s Rexton to do the same in the Indian market. It has already confirmed plans to launch Rexton in the Indian market in the second half of this year.

Often called the Cheetah, the XUV500 is a seven-seater SUV available as a two-wheel drive or four-wheel drive. Priced at 1.5 million rupees ($28,449) for the four-wheel drive version, the popular SUV in India competes with the Toyota Fortuna, Chevrolet Captiva, Mitsubishi Outlander and Hyundai Santa Fe.

In a separate interview, Goenka confirmed that Mahindra would launch the XUV500 in Chile, Europe and Australia as it ramps up the production in India from current 2,500 vehicles to 4,500 a month.

Mahindra, which owns 70 percent of Ssangyong Motor, said it planned to launch 5 new versions until 2016. The confirmed launch of the Rexton in India this year and the Korando C for next year will give Ssangyong and Mahindra time to fill the pipeline to build new products, Goenka said. Because India’s premium SUV market is a small one with an annual volume of 15,000 to 20,000 units, Mahindra said it was tempering its sales ambitions, but it hopes to capture about one-third of the segment within a year, which would open doors for Mahindra to move up to the premium brand segment.

“This (launching plan) is an aggressive plan. We take about five new (versions) and four new platforms by 2016. We will fully support for any new product development by Ssangyong in the process,” Goenka said.

While he didn’t confirm of new investments for Ssangyong, Goenka emphasized that sharing knowledge and platforms will roughly halve the investment needed to build new products.

“There will be a lot of sharing. For example, power trains can be shared, components can be shared so when we add all that together, the burden on Ssangyong will be roughly halved,” he said.

Ssangyong Motor CEO Lee Yoo-il said the company has spent about 240 billion won ($206.9 million) to develop the Korando C and that its future products would require more investment.