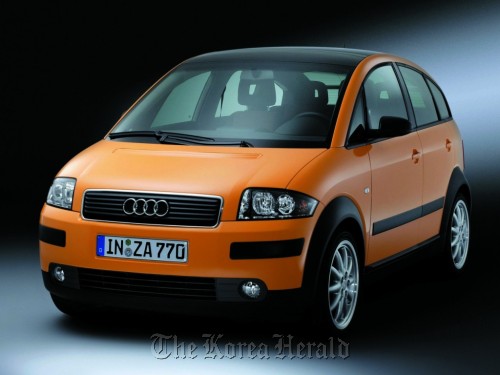 Audi A2
Audi will add models to feed U.S. passion for sedans and sport-utility vehicles and gain ground on market leaders Daimler AG and BMW.

Audi will use the Detroit motor show next week to unveil a concept “Vail” version of the compact Q3 SUV for the U.S. market and plans to build a sedan version of the A3 hatchback after the newest model comes to market this year, CEO Rupert Stadler said in an interview.

U.S. growth is critical to efforts by Audi, the top seller in western Europe and China, to replace BMW as the world’s largest luxury-car maker by 2015. The Volkswagen AG brand took a step forward last year by delivering more cars worldwide than Daimler’s Mercedes-Benz for the first time. In the U.S., BMW and Mercedes sell more than twice as many cars as Audi.

“The next pillar of the market that we have to conquer is the United States,” Stadler said in London yesterday. “We see opportunities in the SUV and sedan segments.” The Ingolstadt, Germany-based company also plans to bring back the A2 compact car, a model it discontinued several years ago, he said.

Audi will begin producing cars in North America by 2015, building 150,000 vehicles as a first step, Stadler said. BMW and Mercedes are already making SUVs in the U.S. and the Audi CEO said he’ll be looking also at assembling SUVs or sedans in the region. Local production would give the carmaker, which Stadler said is now profitable in the U.S. after years of losses, a natural hedge of $2 billion to $2.5 billion.

The competition among the top three luxury-car brands has heated up, with Audi’s growth prompting Daimler CEO Dieter Zetsche to set a goal of retaking the top spot that it lost to BMW in 2005. To back up its pursuit, the Stuttgart, Germany- based manufacturer is rolling out a line of five sportier small cars, including a coupe and a sport-utility vehicle, to target Audi-leaning buyers like Bo Tang. (Bloomberg)

The 33-year-old purchasing manager for an energy company was eyeing an A3 wagon, which starts at 21,100 euros ($27,000), at a dealership in Frankfurt in late December after earlier considering a Mercedes B-Class. The Audi’s power, value and styling gave it an edge over the van-like Mercedes compact.

“For the same price, there are better possibilities” than a 26,000-euro B-Class, said Tang, who is looking to upgrade from her Mini. “The Audi A3 is just more comfortable and seems to be better quality than the B-Class. You also get more horsepower for your money.” (Bloomberg)