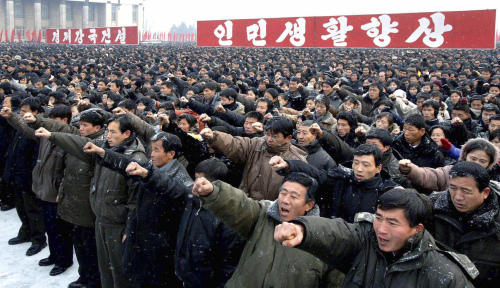 In this photo released by the Korean Central News Agency and distributed by the Korea News Service, thousands of North Koreans gather in Pyongyang to hold a mass rally in support for their country’s policies and new leader Kim Jong-un on Tuesday. (AP-Yonhap News)
After the death of North Korean ruler Kim Jong-il last month, attention is being drawn to possible changes in the status of power organs in the communist state.

The CMC is one of the top power organs including the party’s Central Committee and the National Defense Commission. It is expected to oversee overall affairs concerning the North’s 1.2-millon-strong military, experts said.

During a meeting of party representatives in September 2010, the then non-permanent CMC became a standing body. Jong-un’s supporters, including Korean People’s Army General Staff Chief Ri Yong-ho who also serves as its vice chairman, hold major CMC posts, helping the heir get a firm grip on the military.

“In the North Korean governing system, the status of the party’s Central Committee is relatively higher than its CMC. But as Jong-un is much interested in military issues and cares about gaining a tight grip on the military, the CMC is expected to gain greater power,” said Cheong Seong-chang, senior fellow at the Sejong Institute.

Some experts predicted that the National Defense Commission, regarded as the constitutionally top power organ, will wane with the rise of the CMC.

“Under his military-first policy, the NDC, launched in 1972, was a peacetime crisis management organ, whose power was bolstered after Kim Jong-il officially became the North Korean leader in 1998,” said Ahn Chan-il, director of the World North Korea Research Center.

“In the Kim Jong-un era, the party’s CMC will take the role of the crisis management while the NDC is expected to weaken.”

Cheong of the Sejong Institute raised the possibility that with its chairman post left vacant with Kim’s death and Jong-un yet to have any top post in it, the National Defense Commission could be abolished.

“After the meeting of party representatives in 2010, Jong-un as well as Ri Yong-ho who exercises the military commanding authority has yet to enter the NDC, which reaffirms that the NDC is a military administration and diplomatic organ (rather than a top decision-making body),” he said.

“It is expected that through a constitutional revision, the North may abolish the NDC chairman post and the NDC, but could leave Kim Jong-il as the ‘eternal NDC chairman’ as part of efforts to idolize him.”

But Yang Moo-jin, professor at the University of North Korean Studies, said that the NDC will remain as it is, and that Jong-un will soon succeed the chairmanship to strengthen his legitimacy as the state leader.

“As a legitimate leader in the North, Jong-un should be given a state job so that he can normally manage state affairs. He should be given some sort of legitimacy as a leader with the state job (NDC chairman) when he wants to visit China and Russia as a North Korean leader,” he said.

“Before Kim Jong-il died, he already revised the constitution and carried out a reshuffle of the power echelon to make the third-generation power succession successful. In order to abolish the NDC, the North should revise the constitution again. It is not a cogent argument.”

As to the continuing speculation that the military will have a powerful role in leading the country, experts stressed that the ruling party will be at the center of power in the reclusive state as it has been, with a due emphasis on the military.

“In a communist state, the party is the entirety of the power while the state is part of it. But in a democratic society, it is the opposite. We should not look at the society from our perspective.”

After Kim Jong-il officially took the helm of the North in 1998, the North suffered a massive famine. Kim introduced the military-first policy to overcome such poor economic situations through mobilizing the military in state projects such as major construction works.

“As the overall North Korean system collapsed, Kim carried out the military-first policy to mobilize the military in state affairs and put them at the vanguard of the national projects,” said Chin Hee-gwan, unification professor at Inje University.

“So it was an inevitable choice (for him to introduce the policy). But the military is always under the guidance of the party and it is not that it was ahead of the party.”