Stuttgart, Germany-based Daimler intends to stop producing the $350,000 Maybach when a new version of the Mercedes S-Class comes to market in 2013, Chief Executive Officer Dieter Zetsche said in an interview with Frankfurter Allgemeine Zeitung.

Daimler hasn’t made a profit on the Maybach after deciding to reintroduce the 1930s-era marque in 2002, Zetsche said. Mercedes will double variations of the 72,000-euro ($95,000) S-Class to six as it seeks to boost annual vehicle sales by at least 10,000 a year and step up its challenge to BMW as the world’s top luxury-car maker.

“Closing down Maybach is a rational and financially wise decision,” said Arndt Ellinghorst, an analyst at Credit Suisse in London. “The brand has never managed to live up to its heritage. It makes good sense to enhance the S-Class; there’ll be huge demand, especially in emerging markets.”

BMW and Volkswagen AG’s Audi have grown at more than five times the pace of Mercedes over the past decade by adding new offerings faster. The 125-year-old manufacturer, which has also dropped to third in profitability, lost the luxury-car sales lead to BMW in 2005 and slipped behind Audi this year. 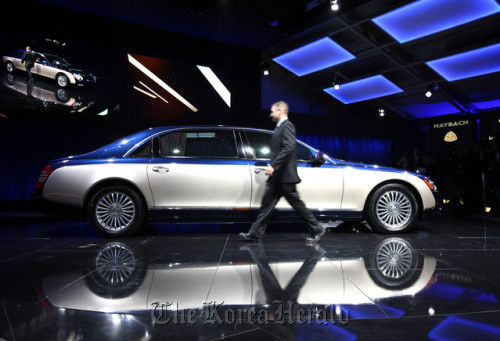 A Daimler AG’s Maybach ultra-luxury saloon is shown at the Beijing Auto Show. (Bloomberg)
Daimler, which Ellinghorst rates “neutral,” has slumped 41 percent this year, valuing the company at 31.8 billion euros. BMW has declined 14 percent and VW is down 4.6 percent.

“Mercedes is now also mounting the attack in the high-end segment,” Zetsche said in comments to the FAZ newspaper, to be published today. “We have always dominated this segment and that should continue to be the case. We don’t want to wait until the others pull ahead.”

Daimler held extensive internal discussions on “which route promises the greatest possible success in the luxury segment,” before concluding that sales prospects were better at Mercedes, the CEO said. The average Maybach takes 60 days to build versus three to four for a typical Mercedes.

“It would not make sense to develop a successor model,” said in remarks confirmed by Daimler spokesman Marc Binder. “The coming S-Class is in such a way a superior vehicle that it can replace the Maybach.”

U.K. luxury sports-car maker Aston Martin, which said at the Frankfurt motor show in September that it expected to conclude talks on cooperation with Mercedes within weeks, declined to comment on the ramifications of Daimler’s comments. Zetsche had said at the expo that the talks concerned Maybach.

Maybach hasn’t seriously challenged BMW’s Rolls-Royce and Volkswagen AG’s Bentley since its reintroduction, with sales topping out at 600 cars in 2003 and sliding to 200 last year. Rolls-Royce sold 2,700 vehicles in 2010 and Bentley 5,100.

The brand last year updated its two sedan models with new chrome grills and cleaner 12-cylinder engines, while rear passengers in the $423,500 Maybach 62 got an optional 19-inch cinema screen. And at the Cannes Film Festival in May, it presented a special edition of the 20-foot 62 that was studded with diamonds from Swiss jewelry maker De Grisogono.

While that helped win over stars like Madonna and rapper Jay-Z, Maybach lacked the tradition of rivals and failed to gain a broad following among the world’s wealthy, The last of the 1,800 original cars was manufactured in 1941, six decades before the re-launch, and the dealership network in the U.S., where 30 percent of cars were sold last year, has dwindled to 30 from 85.

Options for the brand ranged from spending an estimated 500 million euros on a revamp, partnering with a high-end carmaker like Aston, integrating it into Mercedes or shutting it down, Ferdinand Dudenhoeffer, director of the Center for Automotive Research at the University of Duisburg-Essen, said in September.