The first overseas store of Bulgogi Brothers, a local franchise specializing in Korean barbeque, opened Thursday within a hip shopping mall in Makati, the financial hub of the Philippines.

For Zeus Yi, the company’s president, the Manila opening represents the culmination of his research and preparations over the past three years.

“I found there’s no Korean restaurant on the fancy dining floor of the shopping mall. The market potential seemed enough because the delicious flavor of bulgogi would appeal to any palate,” Yi said.

The former hotelier was the same person who first introduced American family restaurant chains TGI Friday’s and Outback Steakhouse to Korea in the 1990s. And now Yi aims to go global with Korean food.

Bulgogi Brothers, established in 2006, offers bulgogi, or grilled beef with soy sauce and sesame marinade, and other barbequed items with its stores embracing modern ambience.

Rather than directly operating the Manila store, the start-up company has inked a partnership deal with the Philippines-based Bistro Group, the nation’s largest franchise operator.

“Finding a good business partner is the most important thing in overseas operations. But some day when the company becomes big enough, I want to enter the Chinese market directly,” Yi said.

Bulgogi Brothers is the latest among many Korean restaurant franchises that seek global expansion recently.

With the domestic market nearing saturation, the rush for global markets started in the early 2000s.

Along with the soaring Chinese market, Southeast Asian countries have been preferred destinations as the popularity of K-pop in the region helps companies settle relatively easily.

Even though the awareness of Korean food is low among foreign customers, it is also true that such a low publicity adds uniqueness to Korean restaurants.

Kyochon Chicken, a household name of soy-sauce fried chicken which has more than 1,000 stores nationwide, is considered one of the most successful Korean franchise chains abroad.

Starting with the first overseas store in Los Angeles in 2007, Kyochon currently operates six locations in the United States and one in Shanghai.

“Americans have long been accustomed to the flavor of KFC chicken. For them, the soy sauce-coated chicken wing was brand new and attractive,” said Kang Jung-goo, a Kyochon official.

“We first entered the Korea town in Los Angeles for soft landing but since then local consumers have become our main target,” he said.

If Kyochon entered overseas markets based on its strong performance in Korea, Bibigo, a fast-food chain for bibimbap operated by CJ Foodville, has targeted foreign customers from the very beginning in May last year. 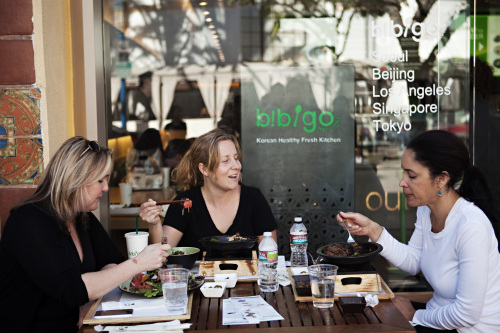 Customers eat bibimbap at the patio of Bibigo’s Los Angeles branch. (CJ Foodville)
Along with five stores in Korea, the bibimbap chain has three overseas branches in Beijing, Los Angeles and Singapore.

Through market research across regions, the company found people have different preferences for main ingredients of bibimbap.

The company now boosts its “healthy and fast” concept, allowing customers to select their toppings, including rice and sauce, so their customized dish is served within one minute.

“A brand that has targeted Korean consumers may have difficulties meeting the needs of foreign consumers. So, we decided our concept that would appeal to foreigners as well as Koreans from the beginning,” said Kim Moo-jong, spokesperson of CJ Foodville.

“Our final goal is to become an international franchise like McDonalds. Because bibimbap is healthy food, it has competitiveness even in the global market,” he said.

There are also other successful cases. Lotteria, a fast food chain run by Lotte Group, is the first local franchise chain to go global with 98 branches in Vietnam and China. Paris Baguette is considered a premium bakery chain as it is located in the well-off Gubei area of Shanghai.

Caffe Bene, the nation’s No. 1 specialty coffee house chain, plans to open its first overseas store in New York within the year, while Bistro Seoul, a high-end hansik restaurant of SunAtFood, aims to open branches in New York, Tokyo and Shanghai in the coming five years.

“However, few companies with big money are seeing profits abroad based on their delicate market research. Now is the ‘transition period’ after the first generation of franchise chains has experienced trial and error at a great cost,” he said.

Ahn agreed going global is the right direction for local restaurant chains in the long term but advised smaller businesses to find a reliable local partner to reduce initial investment and following risks.