According to DigiTimes, a Taipei-based daily, Apple is expected to take 19 percent of the global smartphone market with shipments of 86.4 million units this year. The number of shipped handsets has surged 82 percent from 47.5 million units in 2010. 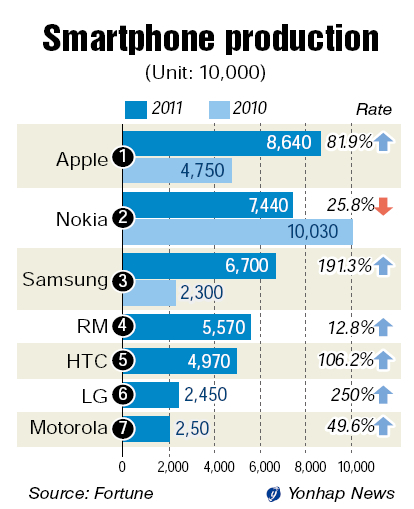 Nokia, another IT giant based in Finland, however, will see significant drop in smartphone shipments with only 75 million handsets shipped this year, a 25 percent decline from over 100 million units shipped in the previous year, the report added.

Not only Apple, but Samsung is also growing strong thanks to the popularity of its Android smartphone. The South Korean technology giant is expected pass HTC and Research in Motion, the report said.

Samsung, which is involved in a bitter legal dispute with Apple, is expected to take the No. 3 spot with estimated shipments of 67 million units. Samsung is followed by RIM with 55.7 million and HTC with 49.7 million.

The report said 462 million smartphones are expected to ship worldwide in 2011, up 60 percent from the shipments of 288 million last year. The top five smartphone manufacturers ― Apple, Nokia, Samsung, RIM and HTC ― are likely to cover 72 percent of the global shipments this year or 333 million units.

Chinese companies like Huawei and ZTE are also growing quickly in the smartphone industry, the Taipei daily specializes in IT sector, said. Huawei, in particular, is expected to reach a 400 percent year-over-year rise in shipments.