[ The Korea Herald – Send E-mail ]
Kakao Talk set to embrace social games
By
Published : Sep 4, 2011 - 19:24
Updated : Sep 4, 2011 - 19:24
Kakao Talk, the country’s most popular messenger app for smartphones, is to team up with a game developer in a bid to open up a fresh revenue channel amid heightened industry-wide interest in such messenger apps.

Kakao Talk has been widely adopted by users of Apple’s iPhone and Android-based smartphones, but the free program is yet to secure a reliable source of income. 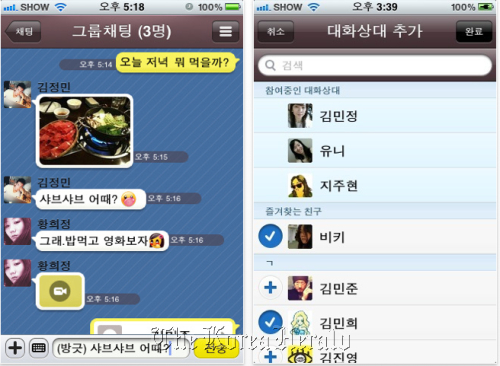 Kakao Talk is now said to have agreed to link its core messenger app with games developed and operated by Wemade Entertainment, a Korean online game developer. The linkup, slated for next month, will expose Wemade’s social network games to Kakao Talk’s some 20 million users, taking cue from global frontrunners such as Zynga.

Social network games via mobile phones are in their early stage, however. The addition of or connection with social games is also feared to slow down the operations of Kakao Talk, whose message delivery speed is closely related to customer satisfaction.