Samsung, Apple’s closest rival in tablet computers, pulled the just-unveiled Galaxy Tab 7.7 out of the IFA consumer- electronics show in Berlin after a Dusseldorf court on Sept. 2 granted Apple’s request to ban sales and marketing of the product, James Chung, a Seoul-based spokesman for Samsung, said by telephone Sunday. 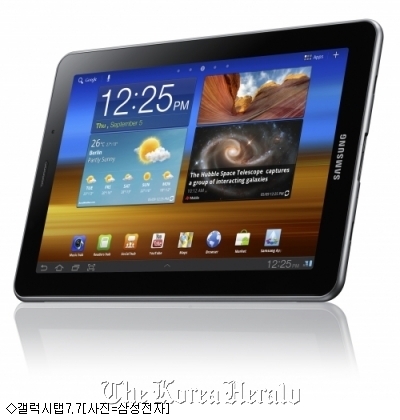 “Samsung respects the court’s decision,” Chung said, adding that the company believes it “severely limits consumer choice in Germany.” Samsung will pursue all available options, including legal action, to defend its intellectual property rights, he said.

Samsung and Apple, maker of the iPad, are involved in legal disputes across three continents, as Apple ― also one of the biggest customers for the South Korean manufacturer’s chips and displays ― claims the Galaxy devices copied its iPhone and iPad. Last month, the Dusseldorf Regional Court granted Apple a temporary sales ban on the earlier Galaxy Tab 10.1 model in 26 of the 27 European Union member countries.

The August ruling, scaled back to only Germany on jurisdictional grounds, could have cost Samsung sales of as many as half a million units this year, according to an estimate by Strategy Analytics.

Legal disputes between the two technology companies began after Apple charged Samsung with “slavishly” copying its products in an April suit filed in the U.S. Samsung, which holds the second-largest number of patents in the U.S., countersued in Seoul, Tokyo, Germany and California.

Samsung on Aug. 25 lost a court ruling in Holland which ordered it to halt some sales of its smartphones after Oct. 13.

In Australia, Samsung agreed to push back introduction of the Galaxy Tab 10.1 until the end of September, the second delay in a month.