North Korea agreed to “unconditionally rejoin” the stalled six-nation talks aimed at resolving its nuclear standoff during a summit meeting between its leader Kim Jong-il and Russian President Dmitry Medvedev on Wednesday, a spokeswoman for the Russian government said. 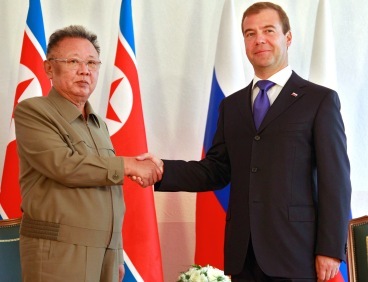 Pyongyang is ready to resume international talks on its nuclear program without preconditions and “in the course of the talks North Korea will be ready to resolve the question of imposing a moratorium on tests and production of nuclear missile weapons,” said Natalya Timakova.

The six-way talks have long been stalled. South Korea and the United States have demanded that North Korea first show its sincerity on fulfilling past nuclear commitments.

“As far as I understand, North Korea is interested in the implementation of such trilateral projects with the participation of Russia and South Korea,” Medvedev said after the rare talks which he called “open and substantive.”

The summit between Kim and the Russian leader was the highlight of the reclusive Pyongyang leader’s week-long land journey through Russia’s Far East and Siberia, his first visit to the country in nine years. Kim was expected to leave the country shortly after the meeting.

Among other issues, the secretive meeting appears to have provided a step forward for Moscow’s longstanding proposal to build a pipeline that would stream Russian natural gas through the North’s territory to the South.

The Russian leader said he has instructed his government to work out a framework for a subsequent agreement between Moscow and Pyongyang upon North Korea’s most recent expression of support, reports from Russia said.

The proposed pipeline would stretch more than 1,700 kilometers and start transporting volumes of up to 10 billion cubic meters per year. South Korea also supports the plan.

Russia’s natural gas monopoly Gazprom has been negotiating with the communist state and sent a delegation to Pyongyang last month, for the third round of talks this year.

Once the rare deal is finalized, Pyongyang, which has relied heavily on outside aid to feed its population of 24 million since the late 1990s, could earn up to $100 million each year, according to Seoul’s estimation.

Kim, who rarely travels abroad and is still recovering from a stroke he suffered in 2008, appears to have made the visit to win Russia’s support in resuming the stalled multinational denuclearization talks and secure financial backup, analysts say.

Kim’s trip to Russia comes as the North is struggling to secure more outside assistance ahead of the 100th birthday of its late founder Kim Il-sung, the father of the incumbent Kim. The ironfisted regime has promised its starving people that a “powerful, prosperous” nation will be built by the centennial of the birth of its founder, a goal it is determined to achieve ahead of a power transfer to young heir apparent Kim Jong-un.

The communist state also hopes to persuade dialogue partners to restart the six-nation nuclear disarmament talks, through which it had received food and fuel for many years until the negotiations came to a halt at the end of 2008.

Upon the meeting between North Korean diplomats and their counterparts from Seoul and Washington, partners of the talks, have been increasing bilateral discussions to decide when and how to resume the dialogue. The negotiations involve the two Koreas, the U.S., Russia, China and Japan.

With South Korea, the U.S. and Japan maintaining a lukewarm attitude after its deadly attacks against Seoul last year, it is important for North Korea to secure steady support from its traditional allies China and Russia for early resumption of the talks.

Another energy project long under discussion would involve the extension of power lines to make it possible for Russia to sell electricity from plants like the Bureya hydroelectric plant that Kim visited at the start of his trip.

Negotiations over the purported projects, however, have been unable to move forward in recent years due to the nuclear deadlock.

Economic and diplomatic ties between Pyongyang and Moscow weakened after the collapse of the Soviet Union two decades ago, after which Russia focused on capitalist policies.

North Korea has since relied heavily on China for trade, aid and diplomatic assistance, with Kim making three trips to the ally country in just over a year.

Not wanting Beijing to become the sole benefactor with power to influence Pyongyang, Russia has been making efforts to forge the energy cooperation deal with the North.

Some officials in South Korea, however, are skeptical as to whether the meeting will bring real foreign policy breakthroughs or firm economic deals, branding it a ritual.

The summit will more likely influence the dynamics among regional powers related to the long-stalled six-nation talks, they say.

“Russia, which has played a somewhat passive role in the process, may become more active in persuading the North on the necessary conditions for the talks to restart,” a Seoul official said, asking not to be named as he was not authorized to speak to media on the issue.

Kim’s visit was largely shrouded in secrecy due to the reclusive leader’s concerns about security. In the few photographs revealed of the leader during his trip, Kim looked relatively healthy, also using his left hand which was said to have been almost paralyzed after a stroke three years ago.

A day before meeting with the Russian leader, Kim was said to have enjoyed a dip at Baikal, a huge freshwater lake, according to eyewitnesses, also indicating his improved health.

By Shin Hae-in and news reports