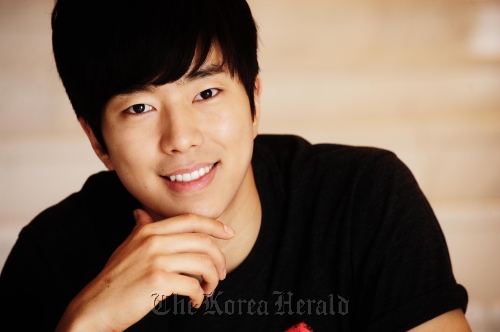 
For someone who used to swing a bat for 11 years, Yoon Hyun-min seemed surprisingly soft and delicate.

The image of Melchior, the character he plays in the musical “Spring Awakening” which started its second round here in June, came out as he talked.

“If the first Melchior was rather manly and tough, I am trying to make my Melchior to really be 15-years-old, although he is way smarter than his friends,” Yoon told The Korea Herald.

The 26-year-old dramatically changed career two years ago. The professional baseball player who was with the Doosan Bears and the Hanhwa Eagles for a total of four years suddenly quit to act in cable TV dramas.

He was not injured. Nor was he picked up by showbiz people thanks to his fame as a sports star. He dove into a world of endless auditions after watching the long-running musical “Finding Kim Jong-wook.”

“I had never thought that acting was such a charming job until I saw the musical. The main actor was so amazingly attractive that I got goose bumps all over,” said Yoon. 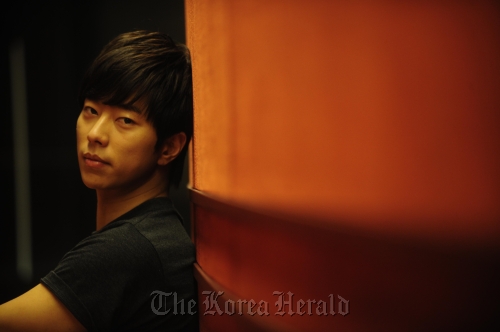 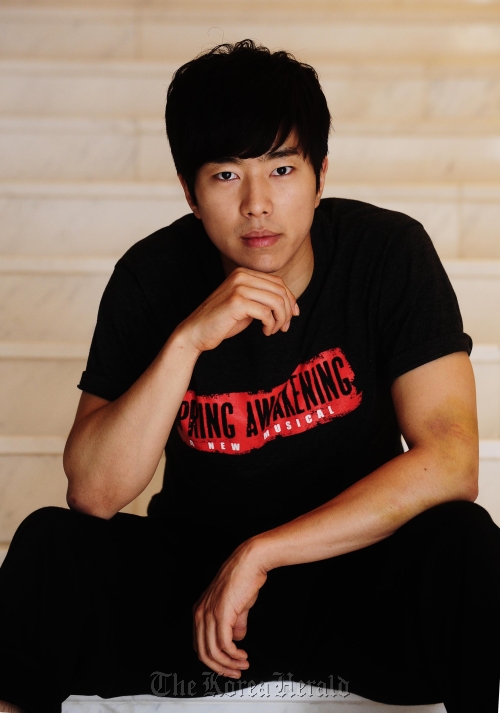 Yoon Hyun-min (Park Hae-mook/The Korea Herald)
Without hesitation, he quit baseball and started auditioning. Soon realizing his limits, however, he went to acting classes and received help from top actors like Gong Hyung-jin and Jang Dong-gun who he knew from Playboys, a celebrity baseball team. Gong aided him to land a part on “Roller Coaster,” a popular cable TV show.

“It is almost frightening to think about it now. I don’t know where I found the courage to give up everything I had. I guess I was really young then,” said the actor.

His talents run in the family ― his father was a member of the national rugby team and his mother graduated from Chung-Ang University’s department of theater and film. But both were quite upset at the news that their son, who had the potential to become a sports star, was abandoning his long-pursued goal.

“After some time my mother came to see me on stage, and said that I did a good job. Now she is a big supporter of mine,” said Yoon.

He found his way into musicals through “Finding Kim Jong-wook,” the same production that had drawn him to acting. He kept the audition a secret from his agency, certain that he would fail, but got the lead role on the first try. All he remembers now about the six months of the run is that he experienced “extreme happiness.”

He got his second main role right away ― Melchior. Premiering on Broadway in 2006, rock musical “Spring Awakening” was nominated in 11 categories for the following year’s Tony Awards. After the Seoul premiere in 2009, actor Kim Mu-yeol, who played Melchior, won the Best Actor Award in the 15th Korea Musical Awards.

Based in Germany in 1891, it is about teenagers who suffer through adolescence, exploring the tumult of sexuality. Yoon said that he is totally reliant on the director and the choreographer to lead him through its explicit scenes.

“I didn’t watch the video footage of the first show, because I thought I would end up mimicking him. The director told me not to waver because Melchior this time would be different and what I am doing is right,” said Yoon.

His acting career is branching out. His first movie “Tuhon,” or fighting spirit, directed by Kim Sang-jin and starring Kim Seon-ah and Kim Ju-hyuk, will open this fall. Yoon plays a baseball player.

“Sports films have to spend a lot of money on computer graphics but my scenes didn’t need them. I really hit homeruns. The director was really happy about that,” said Yoon.

Does he have any lingering desire to return to baseball? Not at all, he says.

“Some of my friends are now playing in the national team, and I just enjoy watching them play. We have different lives now. I still play in Playboys and that’s enough for me.”