“There are no good jobs,” he said while customers browse the discs, each with a makeshift cover slipped inside a cellophane envelope. “If people could make a good living there wouldn’t be piracy. We would all buy originals.”

Absent from these discs are the disturbing drug cartel logos that have begun appearing on pirated movies and music elsewhere in the country: a “Z” or a bucking bronco for the Zetas, a monarch butterfly for La Familia Michoacana.

Experts say criminal organizations such as these have increasingly taken control of Mexico’s informal economy and with it, its multibillion-dollar market for pirated movies, music, software and other goods ― illegally producing, distributing and even exporting the latest Hollywood hits, music by popular Mexican artists and computer programs.

Criminal organizations now make only about half their money trafficking illegal drugs, said Edgardo Buscaglia, an expert on organized crime with Mexico’s Autonomous Technological Institute, a leading university. The other half of revenue, in the billions, comes from smuggling migrants, extortion, kidnappings and Mexico’s vast black market for pirated goods.

The consequences are enormous, said Jorge Amigo Castaneda, director of the Mexican Institute of Industrial Property.

The institute estimates that Mexico lost 480,000 jobs due to piracy and falsification in 2009, the latest year for which statistics are available.

For example, the faking of brand-name apparel cost the clothing industry $9.5 billion. The footwear industry, which has seen 70 percent of businesses close in recent years, must compete with the 200 million pairs of counterfeited “brand name” shoes that enter the country illegally each year.

With intellectual property of all kinds at serious risk of piracy or falsification in Mexico, the country loses its competitive edge in attracting national and foreign investment, Amigo said. 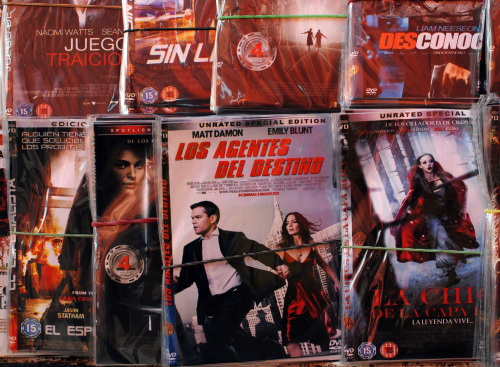 A street stall in Mexico City offers more than 200 pirated movie titles, including new Hollywood releases for just 15 pesos, or about $1.30. Inside the Sanborns department store next door, original titles can cost as much as 280 pesos, or about $24. (Lauren Villagran/Dallas Morning News/MCT)
Mexico dropped six places to No. 66 in the World Economic Forum’s 2010-2011 report on global competitiveness, falling behind Panama, Costa Rica and Uruguay.

The hand of organized crime in piracy is evident, experts say.

The cartel logos popping up on movies, music and software discs are “obviously not registered trademarks, but it’s their own brand,” according to a government official who asked not to be named for security reasons.

“If someone from La Familia shows up, enters (a store) and sees that the discs don’t carry the butterfly, things are going to get ugly for the owners,” the official said. “They are forcing stores to buy their discs.”

Drug traffickers “get involved in piracy in the same way they get involved in the kidnapping of migrants,” said Gustavo Fondevila, an expert on piracy and criminal organizations with Mexico’s CIDE think tank. “They’re looking for ways to diversify their criminal business.”

Less than a mile away from where Ramirez mans his stall, Federico de la Garza sits in the Mexico City office of the Motion Picture Association where, as director, he is working on a campaign to convince Mexicans not to buy pirated goods.

Nine out of 10 movies sold in Mexico are pirated, he said.

With law enforcement and judicial institutions weak in Mexico, both the Motion Picture Association and the Business Software Alliance are working to convince the public that piracy is harmful.

The Motion Picture Association is sponsoring commercials that aim to instill a sort of “social shame” around buying pirated goods. The spots ridicule piracy and call into question a consumer’s values.

The Business Software Alliance is working with chambers of commerce throughout Mexico to encourage business owners not to purchase pirated software.

“It is not about prosecuting more people; it’s about asking society for a pact in which we can all work together,” said the association’s Mexico manager, Kiyoshi Tsuru. “The problem is massive.”

Even when people believe that buying pirated items links them to organized crime, foments delinquency and weakens local industry, they still shop for pirated goods. In a 2009 study of affluent consumers, the American Chamber of Commerce in Mexico reported that 88 percent of respondents had purchased pirated goods, even though most view piracy negatively.

Ramirez, the vendor, said he knows it’s a crime to buy pirated goods. Still, he regularly shops for movies ― action flicks for himself, cartoons for his children.

The stall he watches was raided by police about three months ago, he said, but normally “they don’t bother you here.”