The part-time clown hopped on his bicycle and began a trans-continental journey with a mission: to bring smiles to those in despair wherever he went.

“I came to Busan by boat from Japan,” said Neil, who cycled the 450 km to Seoul from Busan last week, adding that the hospitality was among his most positive first impressions of Korea.

“My first day here, a Korean woman invited me to her house. She dropped me there alone, as she was working, and seven hours later she came with her husband and took me for dinner.”

The pedaling funnyman was less impressed to discover that Korea is no cyclists’ paradise, with, in his words, less road signage than the Gobi Desert.

On his website, “Biciclown” says he doesn’t know exactly why he was compelled to undertake his journey, but that “the cemetery is full of dreamers” and he “did not want to join them.”

“Life is not boring, we make life boring. If for you a 9-5 job is not boring, it is OK. For me it was not the best. Now I have no boss, no job, not much income, but more freedom than many people,” Neil said.

Neil spends just 5 euros a day on food and accommodation, often sleeping in the tent he carries with him and cooking on his portable stove. He says his monthly budget is 300 euros, funded mostly from his personal savings as well as donations from the public. But despite his lack of income, Neil does his clown routines for free.

“I just decided to take the clown with me to give smiles to the people as they were very kind to me in many countries. But as I decided to do it for free, I can choose my audience. I only do it in special places such as orphanages, prisons, refugee camps, where people are suffering for some reason. And for no less than 200 people.” 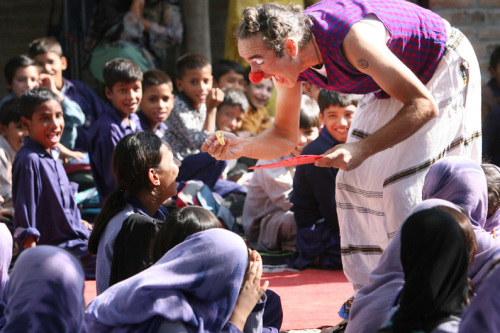 Alvaro Neil, aka “Biciclown,” raises smiles from children in Pakistan. (Alvaro Neil)
Neil doesn’t know when his mission of “Miles of Smiles Around the World” will come to an end, nor does he know if he will ever return to his hometown of Oviedo in Spain.

“I have no home in Spain. My home is where my bike is. Today is Seoul. If normally I do not know where I am going to sleep every day how can I know what I am going to do in seven years?” he said.

Although Neil has no plans yet to settle in one place, he does have a favorite country.

“Bhutan. I got a free visa from the government. Usually visas fees are expensive. But because of my project they gave me two weeks of free visa. I cycled one of the happiest countries in the world,” he said.

As for his next destination, he is going somewhere where smiles are badly needed right now.

“I will come back to Busan where I will take the boat to Japan. There I hope I can perform for tsunami victims,” he said.

And what would the roaming comic say to those who are sick of the daily grind and envy his freedom, but are afraid of doing without the comforts of modern life?

“If you are scared I have no answer. The road will give you the answers. One step leads you to the other but the most difficult one is the first step. It is not an easy life but maybe because of that it is an interesting way of life.”