[ The Korea Herald – Send E-mail ]
More producers make green cleaning solutions
By 김후란
Published : Jan 6, 2011 - 18:14
Updated : Jan 6, 2011 - 18:14
LOS ANGELES ― Maybe 2011 is the year a clean start means returning to Grandma’s scrubbing ways and getting down on hands knees with simple baking soda and vinegar. Or maybe it means staring down that supermarket aisle of cleaning products and making better choices about the dizzying selection of powders and liquids that claim not only to clean but also to be healthy for people and the planet. Sustainable, Earth-friendly, green, renewable ― what do the words tell a shopper?

“The last 24 months was a real sea change as large traditional brands are introducing greener or green versions of products. I believe that trend will continue,” said Jeffrey Hollender, author of a new book, “Planet Home,” and former chief executive of the cleaning products company Seventh Generation.

“On the industry side, it really is about sustainability all through how products are made, resourced, formulated, delivered to the store, recycled,” said Brian Sansoni, a spokesman for the American Cleaning Institute, a trade group based in Washington.

One brand, Earth Friendly Products, has seen its sales quadruple in five years as it gets shelf space in Costco and supermarkets and no longer is relegated only to health-food stores, said Kelly Vlahakis-Hanks, company vice president and daughter of the founder. 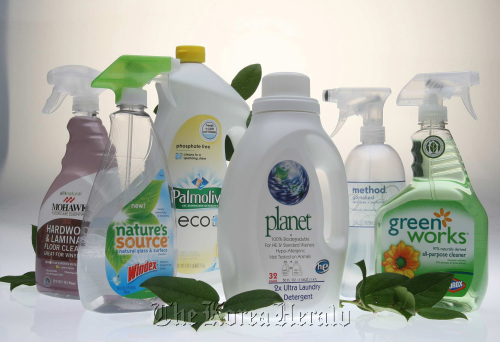 Manufacturers are making more planet-friendly products and consumers are buying them. (Los Angeles Times/MCT)
“Eventually, everyone will go green,” she said.

“You see the biggest, most astute companies ― they’re all positioning themselves in recognition of that,” Davies said.

An early complaint about Earth-friendly products was that if they did no harm, they did no good either ― that is, they didn’t clean well. But consumers no longer have to sacrifice effectiveness, Sansoni said. Products have improved, but shoppers have to wade through the “greenwash,” sorting out claims for nontoxic, green, planet-friendly and other attributes without clear definitions.

One strategy: Look for the EPA’s Design for the Environment seal indicating the product has met the program’s sustainability criteria, which include the product’s effect on human health, Davies said.

In 2003, 43 products qualified for the seal. Now more than 2,000 products from 300 manufacturers qualify, including store brands, “green” companies such as Method and Seventh Generation as well as older manufacturers such as SC Johnson and Colgate-Palmolive, Davies said. Most products don’t earn the seal the first time they apply, but they can change their formulas and eventually comply, he said.

In late 2010, the California Air Resources Board adopted a rule that will mean reformulations of about 2,000 consumer products to reduce volatile organic compounds, or VOCs, to lower levels of smog-forming ozone.

“The reductions should not alter the effectiveness of the products,” said Dimitri Stanich, a spokesman for the air resources board. But over three years, the changes will eliminate daily emissions of about 7 tons of ozone, which burns the nasal passages, irritates lung tissue and triggers asthma and other diseases, Stanich said.

Green cleaners can be made with plant-based oils, herbs and even vinegar, which is appearing in products such as Windex Multi-Surface Vinegar. Joey Green, author of the book “Cleaning Magic,” noted that vinegar is just one of the old-fashioned pantry staples that people can use on their own. White vinegar not only cleans but also deodorizes a room if it’s misted. Vanilla extract on a cotton ball placed in a saucer will do the same. Toothpaste cleans silver and can remove crayon stains on a wall, Green said.

“You don’t have to run out to the store and buy some product in an aerosol can to get stains out of your carpet,” Green said. “Grandma would say you could just use baking soda to clean that and everyone would say, ‘Get with the program, Grandma. There’s a product for that.’”

Maybe people are listening: Sales of household cleaners for the year ending Nov. 28 fell 2 percent to $1.47 billion, according to the research firm SymphonyIRI Group.

Perhaps in reaction to frugal times, new products expected to hit the marketplace include more laundry detergents that work well in cold water and detergents that not only clean but also soften and take static out of clothes, Sansoni said.

Hollender and others said consumers need to be aware not just of the products but of how companies produce, package and ship them. Shipping cleaners that are made mostly of water has a “lousy environmental impact,” he said, because of the extra fuel consumed in transporting the extra weight.

In Europe, he noted, more concentrated cleaners and more refillable packages are already on store shelves.

Jason Foster has designed a product that could mean less discarded plastic. His company began selling a general-purpose cleaner called Replenish in the fall, so far only online.

Replenish (www.myreplenish.com) comes as an empty, reusable plastic spray bottle with a reservoir of liquid concentrate attached to the bottom. The reservoir contains enough concentrate for four bottles of cleaner; when the spray runs out, consumers simply refill the bottle with tap water.

“If we can get away from waste with a better design,” he said, “that’s what we should be going for.”